The world’s No. 1 and No. 3 teams will meet far earlier than they should thanks to FIFA’s planned draw for the 2015 Women’s World Cup.

Friday’s quarterfinal between Germany and France is a match-up befitting a tournament final, but we’re happy to greet it early.

The Germans bring a heck of a resume to this quarterfinal, having lost just a pair of matches since 2008. The world’s No. 1 side boasts the tournament’s two leading scorers, Celia Sasic (right) and Anja Mittag both have five, and has outscored its four World Cup opponents by a combined score of 19-2.

France’s numbers aren’t as gaudy, but still impressive. The French have a 9-2 advantage on their opponents, with their only blip a 2-0 upset at the hands of Colombia. 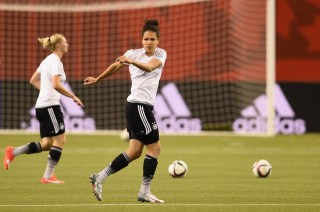 The winner will be expecting the United States, which faces China at 7 p.m. EDT.