Petr Cech is a Chelsea legend.

After winning 13 major trophies in 11 years at Stamford Bridge and setting the record for most shutouts (228) in club history, saying goodbye for the Czech Republic international goalkeeper was never going to be easy.

But, after falling behind Thibaut Courtois in the pecking order at Chelsea during the 2014-15 season, Cech has sealed a $15 million move to Arsenal. Life goes on. But Cech wants the fans to know his true feelings towards the club and that owner Roman Abramovich helped him fulfill his desire to remain in the PL despite his decision to push through a move to rivals Arsenal unpopular with some Chelsea fans.

The letter below to Chelsea’s supporters was posted on the club website, as Cech said farewell to those who have adored him since he arrived in west London in 2004.

There’s no direct mention of Jose Mourinho by Cech, who was said to have opposed selling the 33-year-old to Arsenal as it would strengthen a direct rival for the PL title. But in the end Chelsea’s owner, Mr. Abramovich, sanctioned the deal as Cech’s loyalty to Chelsea was rewarded by the transfer he wanted. When he lines up for Arsenal against Chelsea on August 2 for the FA Community Shield at Wembley Stadium, it will be very weird.

Petr, over to you… 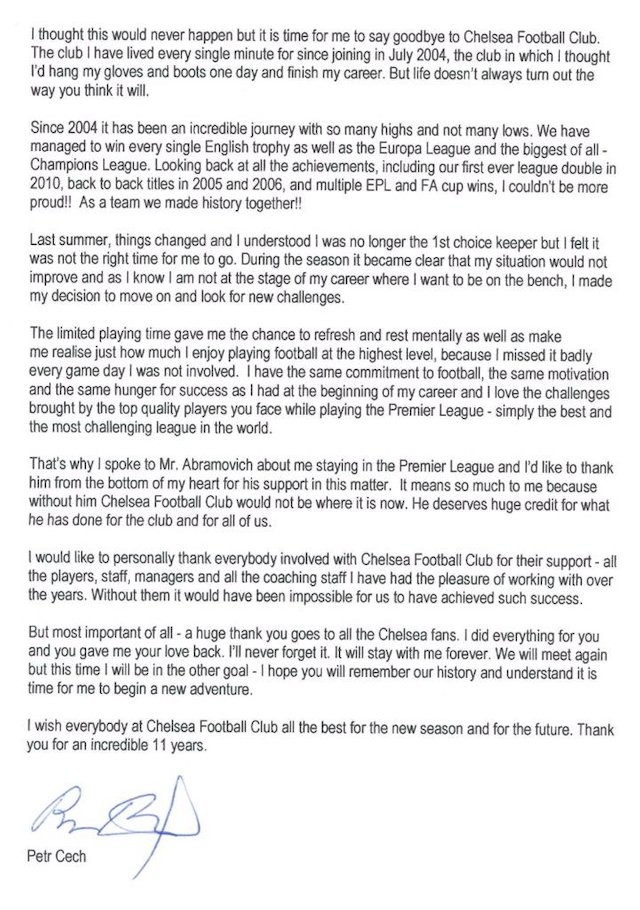