Who said romance in soccer was dead?

12 years after leaving Brighton Hove & Albion for the bright lights of the Premier League, Bobby Zamora has returned in epic fashion, and fans are absolutely thrilled about the return of the club hero.

Zamora spent three seasons at Brighton between 2000-2003, where he scored a whopping 83 goals in 136 appearances, leading the club to two successive promotions into the second tier of English football, and they’ve bounced between there and League One ever since.

He spent Premier League stints with Tottenham, West Ham, Fulham, and QPR spanning 10 seasons in the English top flight following his departure from the Seagulls. He brought the Cottagers to a Europa League final with wins over Shakhtar Donetsk, Wolfsburg, and Juventus, and earned a pair of England caps along the way. Now, at 34 years old, Zamora was released by Queens Park Rangers earlier this summer. So he decided to go back to where it all started.

Look at that smile!

“We are absolutely delighted to have brought Bobby back to Brighton, he needs absolutely no introduction here,” said Brighton manager Chris Hughton. “The Albion fans know everything about him, from his achievements in a Brighton shirt and right through his time with Spurs, West Ham, Fulham and QPR.”

“I also know Bobby well, having worked with him during his time at Spurs, and he is a great professional. I know he will bring plenty of experience to the team, having played Premier League, European and international football. He will also bring a lot in terms of character to the club and to the dressing room but, most importantly, having played more than 30 times for QPR last season, he brings top quality to our offensive options.  We still have work to do in terms of adding to the squad, including those offensive options, in terms of creating and scoring goals.”

They accompanied their announcement with this hilariously epic Vine:

The only thing better than that video is the replies from Brighton fans. Soccer twitter can be a very nasty place at times, but there’s clearly hope for the locale yet. 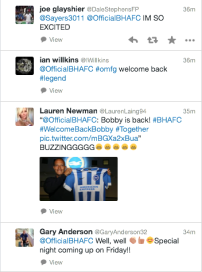 There’s plenty more where that came from as well. It’s wonderful to see such an experienced and tenured player come back to the place where it all began. Fans even took control of his Wikipedia page to sneak in a small token of excitement: