If offense wins games and defense wins championships — as the old adage goes — then what about the men in the middle of the park, the midfielders making the lives of both the forwards and defenders so much easier?

Without those midfield technicians, the sport of soccer would essentially boil down to big, ogre-ish defenders lumping long balls forward to equally big, but slightly more skilled forwards to smash powerful shot after powerful shot in hopes that eventually one might beat the goalkeeper.

Whatever your team needs most on any given day — tracking back to win the ball, slipping the perfect through ball for a vital scoring chance, or man-marking your opponent’s creative genius out of the game — you can count on a midfielder to do the job.

In case you can’t tell, here at PST we love us some midfielders, so who’s in our top five Premier League midfielders?

5. Nemanja Matic, Chelsea — Given the way that Jose Mourinho demands his side plays — pragmatic as could be — Matic proved last season he’s as important to his team as any player in the PL. The 27-year-old Serbian makes not only his fellow midfielders infinitely better, but the defenders behind him as well. 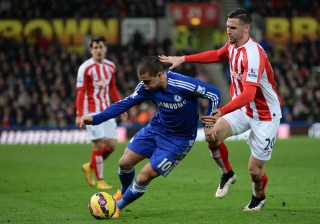 4. Cesc Fabregas, Chelsea — Yes, this list is going to be Chelsea-heavy, but considering they won last year’s title by eight points and their midfield was the main reason for doing so, why wouldn’t it be? 18 assists in 2014-15 meant the 28-year-old Spaniard topped the charts by miles and miles (11 was the next closest).

3. David Silva, Manchester City — The 29-year-old Spaniard bounced back in a big way last season — after a subpar 2013-14 campaign led to questions about his long-term future at the Etihad Stadium, Silva followed that up with seven goals and 11 assists in league play. Even with the arrival of Raheem Sterling this summer, Silva remains the creative hub behind Sergio Aguero’s barrage of goals.

2. Morgan Schneiderlin, Manchester United — An absolute workhorse in the midfield and a sensational passer of the ball, the 25-year-old Frenchman is exactly what the Man United midfield has been missing for years now. On the big stage at United, he’ll prove worth every last bit of the $42 million paid to Southampton this summer.

1. Eden Hazard, Chelsea — The reigning PL Player of the Year is said — by his own manager — to be in the same stratosphere as Cristiano Ronaldo and Lionel Messi. While he’s probably still got a ways to go before that’s true, the 24-year-old is, frighteningly, still far from the finished article.