New West Ham manager Slaven Bilic got off to a flying start to his Hammers tenure with a stunning 2-0 win over title hopefuls Arsenal at the Emirates.

Cheikhou Kouyake took advantage of some poor free-kick marking to open the scoring just before halftime, and Mauro Zarate cracked a low fizzler past Petr Cech for a 2-0 lead on the hour mark to put the visitors through.

West Ham’s physical play cost them early with a pair of yellow cards to Mark Noble and Angelo Ogbonna just eight minutes in, and handed Arsenal a few set-pieces which saw a headed chance for Laurent Koscielny that he floated just over the top corner, and Alex Oxlade-Chamberlain went close with a volley.

The visitors had a chance on 20 minutes thanks to great work on the wing from Winston Reid that resulted in a stretching effort by Diafra Sakho but it was well covered. As things progressed towards the half-hour mark, Arsenal lost its grip on the game and the game seemed to retreat into its shell. 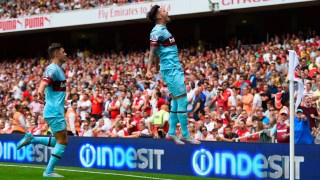 The Gunners began to look clunkier as the first half ticked down, and just two minutes before halftime West Ham took a shocking lead. A free-kick from a long way out sliced into the box and Petr Cech made the decision to come out. It turned out to be the wrong decision as the veteran goalkeeper whiffed leaving Chiekhou Kouyate totally unmarked to head the ball into the back of the net.

Arsenal pushed for an equalizer out of the second-half gates, but the visiting Hammers got a second to stun the Emirates. Aaron Cresswell was dispossessed on the edge of the box but Francis Coquelin whiffed on his clearance, and the ball fell to Mauro Zarate who ripped a low shot tucked inside the near post.

With the Gunners looking for answers, Wenger brought on Alexis Sanchez with 23 minutes to go, but he had little effect as Arsenal’s quick passing style was easy for West Ham to peg back. There was an ugly clash of heads between Olivier Giroud and Lee Tomkins that appeared to leave both players briefly unconscious, but both made their way back onto the pitch after some treatment.