While Chelsea manager Jose Mourinho refused to speak on the red card that sent off goalkeeper Thibaut Courtois, he had thoughts on something else at the end of the match.

The Portuguese boss was seen absolutely irate as physio Eva Carneiro and her crew ran onto the field late to treat Eden Hazard, forcing him off the pitch for a time leaving Chelsea to fight for a winner with nine men. “I wasn’t very unhappy with my medical staff because you have to understand the game,” Mourinho said in his postmatch press conference when asked why he was jum 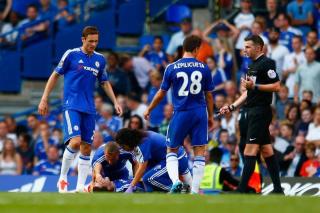 ping around screaming as the physio ran on. “Even if you are a kit man, a doctor, or a secretary on the bench, you have to understand the game and you have to know that you have one player less.

“When you go to the pitch to assist a player, you must be sure the player has a serious problem, and I was sure that Eden hadn’t [picked up] a serious problem. He had a knock, he was very, very tired, and medical department – impulsive and naive – they left me on a counter attack after a set-piece with two players less.”

New rules introduced last season across all of FIFA last season are meant to stop the game for even the hint of a head injury so a player can receive treatment, and there has been an increased awareness for player safety in recent years. But from Mourinho’s point of view, losing a world-class player at such a key moment could have meant the difference between three points and just one.