Pedro’s 115th minute goal helped Barcelona avoid a calamitous loss, as the Blaugranas picked up a thrilling 5-4 win over Sevilla in the UEFA Super Cup on Tuesday.

Barcelona built a 4-1 lead, only to let it disintegrate in Georgia.

Lionel Messi scored a pair of first-half free kicks as Barcelona, and it was his pair of shots on another free kick in extra time that allowed Pedro his close-range winner.

Messi quickly answered with two of his own, before Rafinha Alcantara and Luis Suarez scored to give Barca its three-goal lead in the 50th minute. 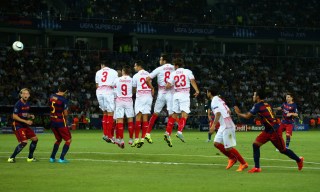 But Reyes converted a close-range shot before Gameiro made the most of a reckless foul in the box from Jeremy Mathieu.

By the time Konoplyanka latched onto a cross from Ciro Immobile, who provided an assist on his first touches as a Sevilla player.

Marc Bartra subbed on late to strengthen the back line, but once the match reached extra time it was Pedro on for Mascherano as Enrique opted for offense.

A late free kick for Messi was blocked by the ball, and his rebound was blocked by Beto. Pedro pushed his run to the doorstep, and buried the loose ball in the top of the net.

Sevilla almost found an equalizer at the death, as Immobile’s cross evaded Rami’s vision and it bounded off the defender’s knee and wide of the goal.