The opening weekend of the 2015-16 Premier League season was rather kind to Aston Villa and Manchester United, as both sides picked up solid 1-0 victories last Saturday — Villa away to Bournemouth; Man United home to Tottenham Hotspur.

When the second weekend of the season gets underway on Friday (yes, you read that correctly), it’ll be Tim Sherwood’s Villa hosting Louis van Gaal’s United at Villa Park (Watch live, 2:45 pm ET on NBCSN and online via Live Extra) to kick things off.

United new boys Memphis Depay, Bastian Scweinsteiger and Morgan Schneiderlin all made their Red Devils debuts but largely failed to impress in their season-opening victory over Tottenham. Meanwhile, it was United’s most unheralded summer signing, Italian right back Matteo Darmian, who stole the plaudits and turned in a man of the match-type performance.

For Villa, life after Christian Benteke has begun. Gabriel Agbonlahor assumed the center forward’s role in the victory over Bournemouth, with summer signings Jordan Ayew and Scott Sinclair (permanent move from Manchester City) flanking him on either side. New club captain and fellow summer signing Micah Richards also made his Villa debut against Bournemouth and played his part in the Villans’ clean sheet (just 10 in 38 games last season). 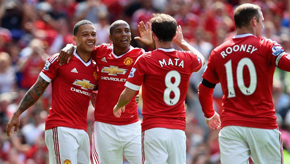 Van Gaal said Thursday that goalkeeper David de Gea will not travel with the team and will not feature for United until either the summer transfer window closes on Sept. 1, or a final resolution is reached in his prolonged transfer saga. Sergio Romero will retain his place in goal for at least one more game.

Sherwood on his side’s youth and potential: “I think they should be excited for the future of this club as these are a group of young men. They’re not old at all. They’re the future of the club and it’s my job to make them very exciting for the immediate future. I think it will be an exciting night for the fans on Friday. They’re coming here very buoyant and it’s up to us to give them a performance that they deserve. That’s what we need to do.”

Van Gaal on his side’s away form: “The key for success this season is improving in away matches. We were one of the best last season at home and I want to create a fortress at Old Trafford. We did that but away we have to improve because last year we were not good.”

This is precisely the type of game about which Van Gaal spoke when he lamented United’s away form last season. Their 2014-15 away record: 6W-8D-5L — good for seventh-best in the Premier League — including losses to Leicester City, Swansea and Everton, among others.

Tottenham were incredibly organized defensively last week, which provided Memphis and Wayne Rooney very little time and space to operate. Meanwhile, Villa were hardly tested by Bournemouth, so much is yet to be gleaned from their overhauled defense. Rooney and Memphis combined for a pair of goals and the Red Devils triumph, 2-1.