For some folks, Jurgen Klinsmann is the answer to what ails the USMNT. To others, like my clever colleague Andy Edwards, he is the soccer equivalent of someone who walks around randomly punching children.

I like to think I’m somewhere in the middle. Overall, the scheduling works for me as do most of his decisions. I wasn’t in the Landon Outrage crowd nor do I anoint every 18-year-old from somewhere in Germany as the next American Messi.

And while the USMNT’s Tinkerman takes a lot of risks with his formation and use of his best players (See: Bradley, Michael), there is at least one area where I just don’t get it: center backs.

Klinsmann has stuck to his guns when it comes to the men in the middle, often omitting Omar Gonzalez and/or Matt Besler in order to use Ventura Alvarado or another young “next big thing.”

Others are going to claim that the squad is being hurt by the continued use of John Brooks, but I don’t take umbrage with his inclusion. He loses his space in marking a bit too often for my likes, but overall I feel the same way as Klinsmann: experience and a better partner will help him find his strong club form for Hertha Berlin.

Take a peak at these defensive action stats from Squawka (Number at left is their rank in their respective leagues).

Of course more goes into playing defense than simple defensive statistics — and Alvarado has a small sample size due to Mexico’s split season — but Brooks’ numbers from the Bundesliga are impressive. The 17th-most defensive actions of any defender in Germany’s top-flight is a big number. 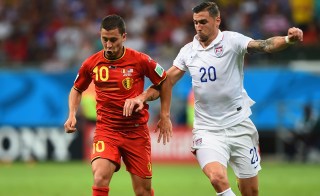 In another half-hearted defense of Alvarado, he could be helped significantly by Jermaine Jones, who returns to the fold this week.

And given Gonzalez’s skills with the ball and in the opposition box, it makes it pretty easy to like him as a pair with Brooks. While I’d still like to see Geoff Cameron get another crack, we know the Stoke City veteran can just as easily fill a role in the midfield or right back.

So it comes down to who fits best when it comes to winning a game that matters, as we’ll soon see against Mexico in the Confederations Cup playoff. For me, I want to see a mix of MLS and Europe in Gonzalez and Brooks. But will Klinsmann give us another Alvarado/Brooks? I’d rather not, thanks.