Cristiano Ronaldo has become much more than an elite footballer. He’s a brand.

From clothing lines to headphones, Ronaldo is raking in cash from all over the place.

One of those places is on social media, where the Real Madrid star makes an estimated $260,000 by simply posting a sponsored tweet.

That means each character is worth more than $1,800…even the spaces.

Ronaldo tops the list of most valuable athletes on Twitter, as the top ten consists of seven soccer players. The only non-footballers are NBA stars LeBron James (#2) and Kevin Durant (#5), and tennis ace Rafael Nadal (#10).

LeBron James only makes $140,000 per tweet, which shows just how valuable an endorsement from Ronaldo is.

With more than 37.7 million followers, Ronaldo is the 13th most followed person on Twitter. The figures ahead of him include Justin Bieber and Barack Obama. 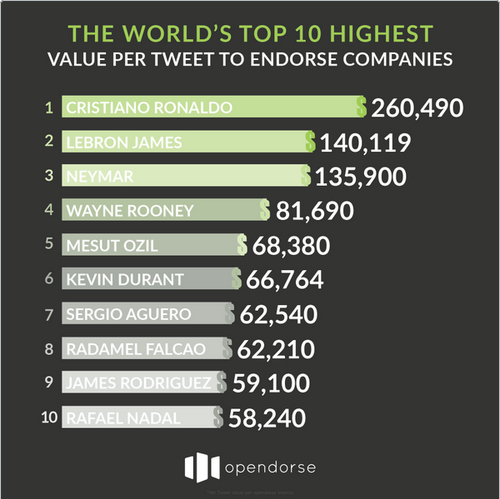