Debut goals and late-match winners were the stories of Saturday in the Premier League, as many of the league’s big boys won big matches.

Anthony Martial and Matthew Jarvis introduced themselves to their fan bases with solid goals, while Chelsea was well-beaten by Everton during a seven-match docket of games in England on Saturday.

A poor first half met an exciting second, as the two major rivals combined for a quartet of goals. The best-looking came from newcomers Anthony Martial’s wonder dribble and Christian Benteke‘s overhead kick, but Daley Blind and Ander Herrera scored the goals that put United up 2-0.

Chelsea’s boss might think his team was better than a no-point performance, but the majority of onlookers think otherwise. Everton got a trio of goals from Steven Naismith, and only a Nemanja Matic wonder strike could beat Tim Howard.

The Gunners did everything well except finishing, but given the chances they produced against Mark Hughes‘ side, nothing but three points would be coming Arsene Wenger‘s way. 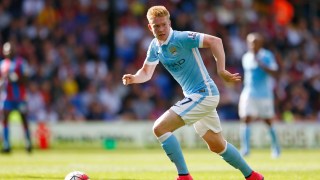 
Both teams could’ve won it, but an unlikely hero found the winner for City. Eighteen-year-old striker Kelechi Iheanacho subbed into the match in the 89th minute, and scored the match’s only goal in the 90th. Kevin De Bruyne debuted, but Sergio Aguero limped off for the perfect league leaders.

Wes Hoolahan has been perhaps the best playmaker in the Premier League this young season. That’s no joke, and neither was the Canaries’ multi-goal win.

Not much to like here for either side, but Saints will rue the lost points more almost as much as the Baggies will accept the one they picked up.