Catch up on all of this weekend’s action from Spain and Italy’s top flights.

Cristiano Ronaldo was off to a “slow” start to the La Liga season, held scoreless in Real Madrid’s opening two matches. That all changed on Saturday, when Ronaldo scored five goals to lead Real to a 6-0 rout of Espanyol. The match was over pretty quickly, as Ronaldo bagged a hat trick in the opening 20 minutes. With the five goals, Ronaldo now has 230 La Liga goals to his name, passing Raul for the most in Real Madrid history. However, it took Raul 550 appearances to score that many, as Ronaldo has passed his mark in just 204 matches.

Lionel Messi didn’t start the match for Barcelona, but he came off the bench and scored the game winner in a big early-season clash with Atletico Madrid. Fernando Torres gave Atletico the lead right after the break, but Neymar found an equalizer just minutes later off a beautiful free kick. Then Messi came off the bench and found the back of the net after a quick one-two with Luis Suarez, as Barcelona remains perfect through three matches.

It was a long day in goal for Granada keeper Andres Fernandez, as two massive errors led to a loss against Valencia. First, his botched clearance attempt went straight to Valencia, as Manuel Trigueros then beat the keeper to his near post. Then just minutes later, another failed clearance led to a Cedric Bakambu goal, making it 2-0 Valencia. Granada would pull one back, but a third tally in stoppage time would ensure all three points to the visitors. 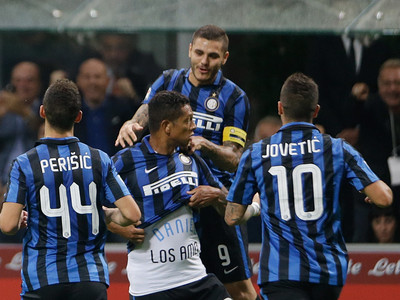 Mario Balotelli made his AC Milan debut, but that was spoiled as rivals Inter took the Milan derby 1-0. Fredy Guarin’s goal in the 58th minute was enough for the win, as Inter remains perfect with nine points from three matches. Balotelli came on after the hour mark and led AC Milan’s attack, looking dynamic with the ball and hitting the post on a long distance strike. However, he was kept off the scoresheet as Sinisa Mihajlovic’s side has now lost two of their opening three matches.

Juventus opened the season with two losses and just barely earned a point against Chievo, needing a late penalty from Paulo Dybala to steal a draw. Perparim Hetemaj gave Chievo a lead just five minutes in, a lead the visitors held for nearly the entire match until Dybala converted his penalty with less than ten minutes to play. After dominating Serie A for the past four seasons, Juve has just one point from three matches and has looked far from the team that went to the Champions League final last season.

Napoli’s new manager Maurizio Sarri faced off against his former club Empoli, but was unable to earn a win, settling for a 2-2 draw. The sides traded goals in the opening ten minutes, but Napoli headed into halftime down 2-1. Just after the break Allan Loureiro drew level, and Gonzalo Higuain missed a sitter that would been the winner. Napoli remains winless in the post-Rafa Benitez era.