When facing a struggling opponent, it’s best to remind them of their problems with early dominance.

Chelsea did nothing of the sort at St. James Park, forced to rally from a 2-0 deficit to an under-pressure Newcastle United side in a 2-2 draw on Saturday.

Ayoze Perez scored for the Magpies, then sent in a corner that Giorginio Wijnaldum headed home in the win, which moved the Magpies up to 18th with five points.

Ramires and Willian scored in the 79th and 86th minutes for Chelsea. The first was especially stunning, and you can check it out here.

Newcastle remains winless this season, and Steve McClaren has yet to win in the Premier League as the club’s boss. Meanwhile, Chelsea has just eight points in seven matches, a shocking figure for the reigning champions.

Newcastle started playing direct, and nearly found success in the 17th minute off a Wijnaldum cross when Aleksandr Mitrovic rose above Gary Cahill to flash his header just wide of the goal.

Then Perez squared a ball that Moussa Sissoko slapped just wide from 20 yards.

The Magpies stayed lively, and Asmir Begovic was forced into a solid stop on a streaking Daryl Janmaat in the 28th minute.

And then: pure class. Perez set himself up with a waist-level touch of a cross from Vurnon Anita, then side-volleyed a hammer past Begovic. 1-0, 43′. 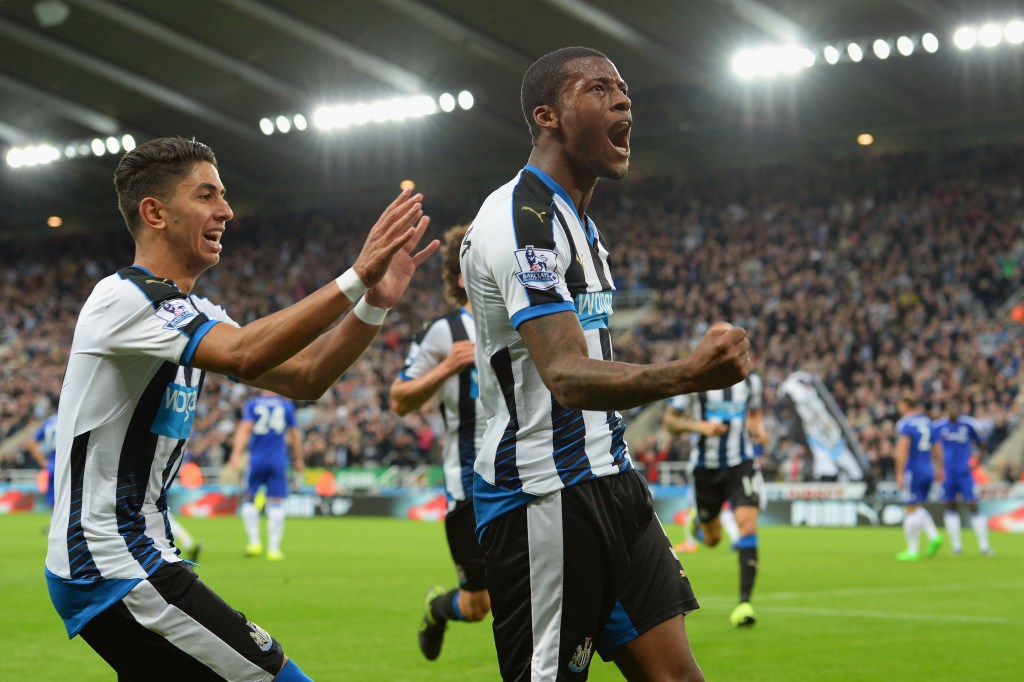 Chelsea looked better to start the second half, with Tim Krul making an outstanding save on Remy, who was later revealed to have caused the offside flag to go up.

But the Magpies — yes, those Magpies — struck again! Perez sent a gorgeous corner into the box, and Wijnaldum easily worked free of a lax Cesc Fabregas to make it 2-0 after an hour.

The Blues looked prepared to narrow the deficit to one when Eden Hazard played a silky ball to Oscar, but the Brazilian smoked his offering wide of the goal.

And then Chelsea did draw within one, as substitute Ramires belted a shot past a flying Krul from 25 yards out. The Blues made it 2-1, and the nerves shot back to Newcastle’s end (if they ever left!).

Pedro should’ve tied the match with a breakaway inspired by Fabregas’ long pass, but the Spaniard sent the ball far over the goal. Poor.

Another substitute did the trick, as Krul lost track of Willian’s 87th minute free kick in a crowd of onrushing Blues to make it 2-2.

Also impressive for Newcastle? Kevin Mbabu, the 20-year-old Swiss making his first Premier League start. The Magpies looked nothing like the listless club that went out of the League Cup at midweek with a 1-0 loss to Sheffield Wednesday.