The world’s best player is out for 7-8 weeks, and life just got tough for Barcelona in the razor-thin race for La Liga.

And the pressure falls heavily on a player many like to think could be the heir to the throne.

The Blaugranas entered Saturday just behind Real Madrid in the table, but now must contend with a distinct lack of Lionel Messi for a couple of months.

That puts a load of pressure on Neymar, who will have to carry the weight while the team waits for Messi’s health and both the arrival of Arda Turan and Aleix Vidal at the end of Barca’s transfer ban in December.

Barcelona, of course, sold usual insurance Pedro Rodriguez to Chelsea in the summer transfer window. They also have skill by the boatload, with Luis Suarez more than happy to attack opponents. And of course, Sandro is a gem at just 20 years old.

However, Real Madrid, Celta Vigo and either Atletico Madrid or Villarreal could be above Barca in the early season table come the end of the weekend. And Barca’s UEFA Champions League group of Roma, Bayer Leverkusen and BATE Borisov is far from a cakewalk.

Barca edged minnows Las Palmas 2-1 on Saturday once Messi left the match after 10 minutes with his knee injury, and the competition improves moving forward.

And we’re about 7-8 weeks away from the first El Clasico of the season. Here’s the projected opposition over the next 8 weeks or so:

How good has he been this early season? Arguably, as good as ever. Look at his stats from advanced statistics site Squawka. 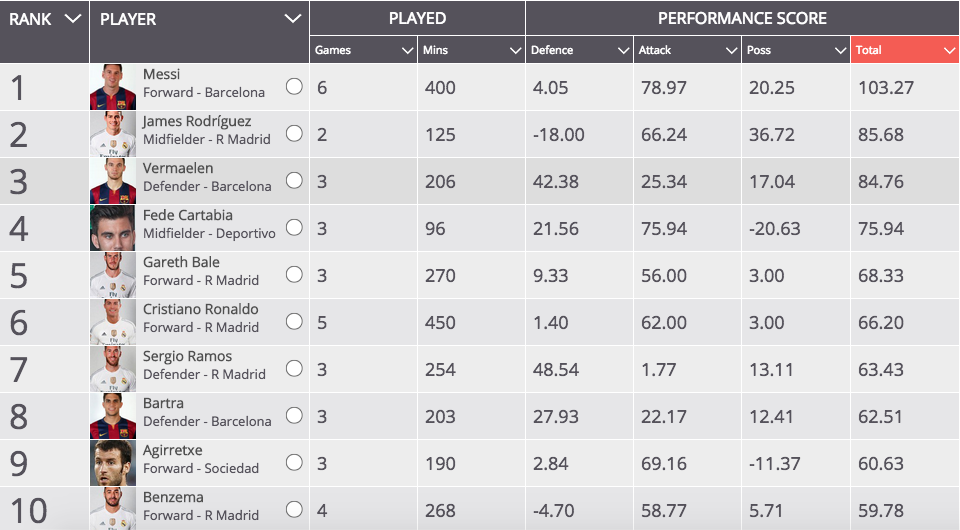 Barca will be able to weather the storm in shouting distance of their rivals, but the pressure will be more on Neymar to express himself as the focus of the team’s playmaking, similar to his captain’s role with Brazil.

Consider that the 23-year-old is also contending with more off-the-field legal trouble due to alleged tax evasion.

The difference between superstars and those once or twice in a generation megawatt personalities come in moments like these. With respect to Suarez, this will be a time for Neymar to express himself as a true giant of the game, not just for the present but in history.

Sure Sandro can help. And Suarez, too. But Neymar wants to be among the best ever. Here’s a chance to show he’s no average superstar.

Whatever that means. Game on.

Newcastle United can become the third Premier League team this season to cross the 40-point marker when it meets West Ham on Saturday at St. James’ Park (watch live, 12:30pm ET on NBC and online via NBCSports.com).

The Magpies have been terrific at home in all competitions, including at midweek where they finished off Southampton to claim a spot in the League Cup Final.

And while the 40-point marker used to just mean safety, Newcastle would stay within sight of second-place Man City and first-place Arsenal.

Meanwhile, West Ham’s mix of bad luck and substandard performances have them just a point above the drop zone, in 16th. A win here would be huge,

Here’s everything you need to know ahead of Newcastle vs West Ham.

How to watch Newcastle vs West Ham live, stream link and start time

The Magpies won’t have their best all-around player in influential Brazilian midfielder Bruno Guimaraes, and center forward Alexander Isak will miss out following a head injury suffered against Saints. Sean Longstaff will need to shine again after scoring twice against Saints.

As for West Ham, they have three attackers out but can look to Michail Antonio and Jarrod Bowen to continue upturns in form.

The first match of the Sean Dyche era at Everton is a visit from the leaders, as Arsenal visits Goodison Park on Saturday (watch live, 7:30am ET on USA Network and online via NBCSports.com).

Dyche has been out of work since his time ended at Burnley last April, but he’ll have instant familiarity with Dwight McNeil, James Tarkowski, and Michael Keane.

So how’s it been around the club as he prepares to take hold of a team that isn’t Burnley for the first time since, thumbs through calendars… still thumbing…2011!

“A new voice, training ways, going about your business, building a bit of rapport,” Dyche said. “I had a good chat with a few players, not in an office kind of chat but speaking to them generally. Their careers, life, how they’re feeling, I always thought if you affect their lives you’ll affect their performance. It’s hard to do visa-versa, I’ve been honest with them. I’ve been down that, we did a Q+A session, I just wanted their feedback. What was the feedback? After that I shared it back with them, this is what we fed back ,what do you think? Gives us a chance to open it up a bit. We need to get to the truth of them, what we can offer, best thing to do is ask them – simple as that. Giving our feel, a different feel to understanding, that’s all. Hopefully they’ll respond and flourish. We’ve got to work, it can’t all be fluff, plenty of hard work this week.”

Former Everton star Mikel Arteta leads Arsenal into the affair with a five-point lead on Man City and a match-in-hand, but it’s also the first match since Arsenal fell 1-0 to City in an FA Cup match considered by many to be a first test for the leaders’ title hopes.

Everton sit 19th in the Premier League table, ahead of last-place Southampton by five goals in the goal difference column.

Here’s everything you need to know ahead of Everton vs Arsenal.

How to watch Everton vs Arsenal live, stream link and start time

Is this what Dwight McNeil has been waiting for after stop-start usage from Frank Lampard? He’s one of the key pieces to monitor when team news arrives Saturday.  Everton hasn’t played since Jan. 21, when it rolled out a 5-4-1 in a 2-0 loss to West Ham. Dyche hasn’t used five at the back since 2019, but this Arsenal team, man…

Arsenal enters having navigated the absence of Gabriel Jesus pretty darn nicely, thank you very much. Will Eddie Nketiah keep feasting off the playmaking of Martin Odegaard and Bukayo Saka?

Let’s just say Everton’s new manager bounce is going to have to include Flubber.