LONDON — Sunderland beat Crystal Palace 1-0 at Selhurst Park on Monday with Sam Allardyce‘s side grinding out just a second win of the season and a first away victory of the campaign.

Here’s what we learned from the Black Cats’ smash and grab win, with Jermain Defoe making the most of a defensive mix up to grab all three points.

For much of the first half Sunderland looked comfortable as they sat back as a five-man defense when Palace had the ball and cut out any space for the Eagles out wide. There were no gaps in-behind for Palace’s pacey wingers to run into as Wilfried Zaha and Yannick Bolasie cut inside but were met by a covering Sunderland player. After 15 minutes, during a stoppage in play when John O'Shea went down, Pardew called over Yohan Cabaye, his general in midfield, and tried to hammer home a point about how to get in-behind the Black Cats. As soon as Palace’s full backs got the ball, that was the trigger for Sunderland’s wing backs — Billy Jones and Patrick Van Aanholt — to drop back and make a five-man defense as Sebastian Coates, O’Shea and Younes Kaboul held steady in central defense marking only Connor Wickham. In the 34th minute Palace had their first good chance of the first half as Bolaise’s overhead kick nearly dropped in and Zaha’s header was off target from a tight angle. The Eagles were starting to turn the screw but the tempo was too slow from the home side and Sunderland were able to retreat into a five-man defensive shell at ease. 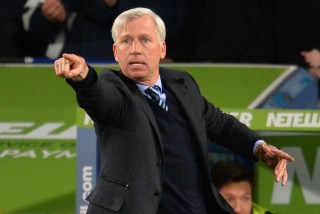 At half time Pardew simply had to change things and Bakary Sako came on in place of Jason Puncheon as the Eagles went to a 4-4-2 formation. From distance Sako curled a dipping effort just wide of the far post 15 minutes after coming on and he did make a difference, but the winger was forced off with an injury and Patrick Bamford lacked the movement to out-smart Sunderland’s defense. Palace had no real plan B and their set piece delivery was awful on the night. Sunderland “did a job” on them and Pardew will be deeply disappointed his team once again failed to break down a team at home who only cared about defending and trying to snatch something on the break. The notion that the Eagles are better away from home is true. Their players are better suited to playing on the break. This season Palace have lost at home narrowly to Arsenal, Man City and West Ham, plus had a 0-0 draw against Manchester United. They have broken down stubborn teams in West Brom and Aston Villa late on at Selhurst but on Monday they ran out of ideas and ingenuinty, missing the chance to move into the top six in the process. It’s not all doom and gloom for Pardew as his side have enjoyed a best-ever start to a PL season thus far. However, they must find a new way to win games as teams figure out that if you cut off the supply line to Zaha and Bolasie you have a chance of winning.

BIG SAM HAS A PLAN

There will be no awards won for style or panache, but Sunderland’s resolute defensive display helped them grab the win. As aforementioned, the Black Cats deployed a 3-5-2 and with the wings backs tucked in they completely nullified Palace’s threat out wide. It is something Allardyce has often done throughout his managerial career and watching Sunderland on Monday was like watching one of his Bolton teams from 15 years ago. Organized. Resolute. Rigid. There wasn’t much fluidity in this display but after three defeats from his opening four games in charge, Allardyce clearly needed to obtain a strong defensive base to build from and then threaten to nick a goal from set pieces. They nearly did just that at the start of the second half when Cabaye cleared Coates’ header off the line. Allardyce has been around the block a fair few times as the stat below shows.

With 30 minutes to go Big Sam deviated from the plan as he brought on Duncan Watmore and Jeremain Lens and switched to a 4-3-3 formation. He fancied getting at Palace’s defense with the pace of Watmore and Lens much needed. It worked with Sunderland looking dangerous on the break and Lens had a glorious chance 15 minutes from time as Watmore burst into the box but Lens’ side-footed his effort straight at Wayne Hennessey. Not to worry. 10 minutes from time the game-winning moment arrived as Jones dispossessed Bolasie and slotted the ball forward to Defoe. He pounced on a terrible misunderstanding between Scott Dann and Hennessy to slot the ball into an empty net and put Sunderland ahead. Big Sam’s plan worked perfectly on Monday as his side are now only one point behind bitter rivals Newcastle and getting out of the relegation zone. There’s light at the end of the tunnel for the Stadium of Light faithful.

“And it’s Jermain Defoe as he proves that he is still a premium scorer of goals in the Premier League!”

That was the proclamation from a radio commentator deep in the Main Stand as Defoe rounded Hennessy and rolled the ball into an empty net to hand Sunderland a vital three points. With four goals in nine games so far this season and seven in his last nine starts, Defoe, 33, remains Sunderland’s main hope of staying up. He was in the right place at the right time and harried a usually cool Dann into making a mistake as he and Hennessy hesitated to let in one of the best marksmen in PL history. Defoe didn’t miss an opportunity like that and the Londoner has now scored at least once in 17 Premier League seasons since he made his debut for West Ham back in the 2000-01 season. He will have to continue to roll back the years if Sunderland stay up this season but with his predatory instincts, they have a chance.