With a tumultuous 2015 in the books for the U.S. national team, head coach and technical director of U.S. Soccer Jurgen Klinsmann has been reflecting on the past 12 months.

In an interview posted by U.S. Soccer on their website, Klinsmann, 51, spoke about a variety of topics but a few things stuck out.

The German coach had high praise for Darlington Nagbe who played in both of the USA’s World Cup qualifier in November with the Portland Timbers midfielder finally getting his U.S. citizenship.

Klinsmann also expressed concerns over both full back positions, is more than happy with four points from the USMNT’s opening two 2018 World Cup qualifiers and challenged the youngsters in his squad to battle for starting spots internationally and reach the highest level possible in club play.

Below are a few snippets we’ve selected from Klinsmann’s chat. Overall, 2015 has been one that has had highs (beating Germany and the Netherlands away from home in friendlies) but there have been plenty of lows with the Gold Cup failure and the CONCACAF Cup loss to Mexico. Its also been a tough year for Klinsmann as many are calling for his departure as USMNT boss but U.S. Soccer president Sunil Gulati is sticking by his man.

What have your impressions of the U.S. national team in 2015 been? Are you hopeful for 2016 as World Cup qualifying continues and the Copa America Centenario takes place in the U.S.?

Here’s what Klinsmann had to say on a few selected topics from U.S. Soccer… 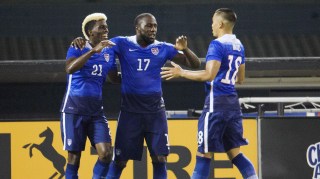 The challenge to younger players has been to push the established guys for starting spots. What is the importance of that process and how has it gone within the team?

JK: “When asking the younger players to step up and challenge the experienced ones, you want them to challenge themselves on a higher level, whether it’s going to the highest club level as quickly as you can and become a starter there and make your statement, like DeAndre Yedlin does now at Sunderland. In camp, we want them to fight harder to push established players for the spots, because if you want to steal the spot, you have to do more to try and move him out. This is an interesting process between two World Cups. Taking the example of Jones, he’s not ready to give his spot up. He’s 34 years old, but he’s a rock. He’s in there every time it matters, he stands his man. He makes it clear to the younger players that he’s not giving up his spot. These kind of competitions are real important with the team.”

A lot of people had positive things to say about Darlington Nagbe. What did you learn about him from this camp?

JK: “We found a player that is really good handling the ball in both directions. He is responsible defensively, to always go behind the ball and to defend, and help out. When we go forward, he knows when to pass, when to dribble, when to keep things racing forward, and also when to take some risks in a certain moment. He has a change of pace in one-on-one situations when he goes at defensive midfielders. He has the confidence to get past them and to get closer to the box. Darlington is a real nice option now going forward. He had to wait a long time, and we’ve been waiting for him as well, but it’s a great fit and we are glad to have him on board.”

In these last two games you also expanded the team’s options at key positions, including both fullback spots. What type of flexibility does this provide moving forward?

JK: “2015 made it clear that we struggled in a couple of areas. The most difficult area for us is the fullback positions. We moved the center backs to the fullback position. We moved Fabian Johnson from left back to right back, which is the position he played in the World Cup – and was probably one of the best right backs in the World Cup in Brazil last year. But he ended up in his club team in Germany playing left winger. So moving him constantly from left winger to left back or to right back, it doesn’t really help him. And for us, one question remains: how do we fill in those left back and right back positons with a high-quality solution? In the last games, we had Tim Ream helping us out as a left back. He plays center back in Fulham. We had Michael Orozco out as a right back, which he did tremendously well, but he’s playing center back for Tijuana. Hopefully in 2016 it will help us develop younger players in the fullback positions. For us, the next important team to look at is the Olympic team and see what Andi Herzog brings through that team in order to develop a younger player into that full back position for the senior team.”

Going into Port of Spain, Trinidad to face the Soca Warriors was a tough match. Are you pleased with how the team dealt with the challenges of that game on the road?

JK: “I think with the game in Trinidad & Tobago, we all knew it was going to be a tricky one. It’s a good team that proved that in the Gold Cup. And away from home, there’s a rule: don’t lose. At least get one point and don’t give the home team the three points. I think we achieved that. Did we want to win both games? Yes, it would have been nice to have six points now, but four points is ideal going into the two games now with Guatemala. Winning those two games would mean that we are qualified for the next round, so our big goal for March is going to Guatemala and get three points right away, at home in Columbus, one of our favorite places to go, and then look forward to the next round.”

How do you view the midfield partnership between Michael Bradley and Jermaine Jones?

JK: “It’s real critical between Bradley and Jones, like all the fans know, they are important to our team. These two always coordinate themselves on the field. They are experienced and know what to do in specific situations. We constantly go over their tactical approach in a game because they can play many different ways. Now you can complement a Jermaine Jones or a Michael Bradley with a more defensive midfielder, like a Kyle Beckerman, or you can complement them with more offensive midfielders, like a Darlington Nagbe or Mix Diskerud. But the heart of this team is always in the center of the park, which is Bradley and Jones.”

What did you see from Jozy Altidore throughout 2015?

JK: “2015 for Jozy Altidore has been a transition year, but it has become a year where he has gotten stronger toward the end. He had some injury issues. He had some fitness issues in the beginning of the year. We had the episode in the Gold Cup where he was not in the shape where he needed to be. Toward July, August and September he got more into a flow. He started to score goals for Toronto and he got stronger for the National Team, as well. This is a very positive sign for us to have Altidore playing well. We plan to bring him into a very busy 2016 with the biggest highlight of Copa America next June.”