Chelsea announced on Tuesday that they have submitted plans to upgrade their existing Stadium Bridge to hold over 60,000.

The Blues will have to play away from their home for up to three seasons while the current stadium is upgraded, with most of the existing structure being demolished and revamped as Russian owner Roman Abramovich will finance the new stadium which could cost over $750 million.

Via the club website, Chelsea issued the following message to fans and their neighbors in West London, as anybody who has ever visited the Bridge will tell you that it’s squeezed into a tight 12-acre site banked by housing, two train lines, a cemetery and more.

A planning application for a new stadium at Stamford Bridge with an expanded seating capacity has been submitted. This follows a successful consultation process during which we received very helpful feedback. This application will now be examined by the London Borough of Hammersmith and Fulham.

The main details of the application are:

– An outstanding view of the stadium from every seat

– An arena designed to create an exciting atmosphere

– Stadium facilities improved for every area

The planning process will last beyond the end of the season; if the application is granted planning permission there will still be a lot of work to do before redevelopment can start, including obtaining various other consents. We will inform you of progress through this process.

This will not be an easy project to get over the line but looking at the stunning photos below, if Chelsea can get this through the planning stage and put a shovel in the ground sometime soon, then their ability to attract almost 20,000 extra fans to home games will see them able to compete and surpass Europe’s big boys financially.

After searching for numerous other sites in London to build a new stadium, Chelsea have instead opted for the costlier option of staying at Stamford Bridge. The redevelopment would involved a complex excavation which would see the pitch lowered into the ground in order to squeeze in all 60,000 fans. If they get the green light the stadium would have the same capacity as Arsenal’s Emirates Stadium, while expansions to Anfield, the Etihad Stadium and White Hart Lane will also see those stadiums hover around the 60,000 mark.

With a capacity of 75, 731 Old Trafford remains the biggest stadium in the Premier League but the others are catching up as UEFA’s Financial Fair Play rules continue to kick in and generating more revenue from ticket sales is key for clubs like Chelsea who aim to perennially challenge for the top titles domestically and in Europe.

[ VIDEO: Gerrard back training at Liverpool ]

If Chelsea are able to build a new stadium at Stamford Bridge they will have to find a temporary solution in London with both Wembley Stadium and Twickenham mentioned as options. However, with Tottenham also looking for a temporary home while White Hart Lane is redeveloped, there could be quite a battle between those two for a solution.

Anyway, take a peak at these photos below to see how a new Stamford Bridge would look. Kind of like the Bird’s Nest in Beijing, right? 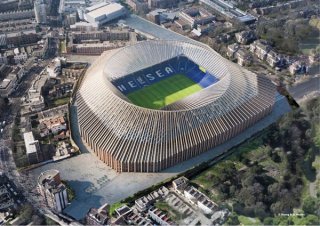