So this is it.

Abby Wambach, one of the most explosive players in the history of her sport, will call time on her playing career after tonight’s USWNT friendly against China.

She’ll walk into retirement with more goals than anyone in international football, having scored 184 goals in 251 caps before Wednesday’s match.

Wambach, 35, has the fifth-best strike rate among the Top 15 scores in women’s history. Toss in men who’ve scored at least 50 goals for country, and her .73 goals-per-game mark is tied for 15th across genders.

She’s won seemingly every award and tournament you can imagine, capping it all off with the 2015 World Cup title.

So when the nation bids adieu to its “G.O.A.T.” — a label from teammates Megan Rapinoe and Hope Solo — it’s saying goodbye to something special, a top-notch finisher and competitor who also has the third-most assists in USWNT history. 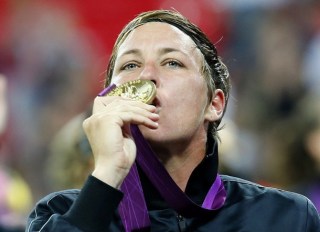 someone who combined absurd physical gifts with an intense desire to be the best. (And she’s in the conversation with Mia Hamm, Michelle Akers and Christie Rampone, but that’s for another day).

[ MORE: Kenny Saief — from the Champions League to the USMNT? ]

Her American records will, in all likelihood, never be broken (Marta, 29, has an outside shot at catching Wambach given her 100 goals in 101 caps for Brazil). The evolution and opportunities in the women’s game have grown to the point that such consistently gaudy numbers — Read: the Yanks just rolling up every team they play —  will likely become a thing of the past, and, presuming the continued growth of women’s club soccer, the days of a player getting as many caps as Wambach will seemingly dip.

So tonight, as we watch Wambach take her bows as the most prolific player in U.S. history, appreciate that such dominance on the score sheet may not come our way again. A special player calls it a night, one who has shined a light for American soccer dominance and promise during a remarkable career.