Given the occasion of her final game with the USWNT, there was precious little chance Wednesday would pass without a major Abby Wambach story.

That that story would regard her thoughts on the men’s national team, however, is certainly a surprise.

The USWNT’s most prolific scorer joined The Bill Simmons podcast this week, and was asked what she would do to fix the men’s national team.

Her answer? Fire Jurgen Klinsmann because he uses too many foreigners and has a helicopter.

From the podcast (Listen around 37-minute mark):

“Oh man, I would definitely fire Jurgen. Sorry, Sunil. Sorry US Soccer but I don’t think Jurgen and the litmus test on him has worked.

“He hasn’t really focused enough attention on the youth programs. Although he says he has, I don’t think that he has. I also believe that the way that he has changed and brought in a bunch of these foreign guys is just not something that I believe in wholeheartedly.

“I don’t believe it in my heart. And I love Jermaine Jones… and I love Fabian Johnson, and is actually killing it after being sent home for quote-unquote faking an injury. I think this experiment that US Soccer has given Jurgen isn’t one that personally I’m into.

“It’s gotta be interesting for those guys to see their coach take off in an helicopter and fly home to his home and then back to training.”

Well, I, for one, am not excited for Wambach’s career as a pundit. 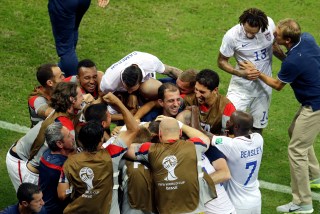 Klinsmann is far from a success story at this point in his career as the USMNT boss, but there’s an unspoken false equivalency to her concerns about getting “perceived” foreigners to play for the States. The U.S. women’s team can win with strictly American-born (more or less) players because this country has the best women’s league and tradition in the world.

And both the helicopter and youth soccer points seem forced (though she’s obviously well-connected).

I won’t go as far as to use a term like “xenophobic”, but if you think the States would’ve been better served by not having the two players she’s mentioned, I’ve got a barrel full of dirt I’ve engineered to taste like cocoa.