Louis Van Gaal is still in a job at Manchester United but you could be forgiven for thinking otherwise.

Given the fact that United’s recent form is their worst since 1989, perhaps it wasn’t too premature for this to be happening.

This being Manchester United scarves sold by independent market stalls outside of Old Trafford ahead of the visit of Chelsea with Jose Mourinho on them.

That’s right, merchandise of Mourinho in United colors is already being sold as the former Chelsea boss is the man many Red Devils supporters want to replace LVG as the Dutchman’s lackluster philosophy is failing to get results.

Take a look at the photos below to see what was on offer at Old Trafford.

With Pep Guardiola also said to be interesting United if they do fire Van Gaal, plus Ryan Giggs also in with a shout, surely these scarves are ridiculously premature?

Then again, who knows… 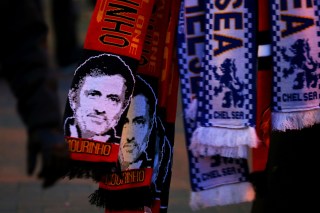 Jose Mourinho scarves being sold outside #MUFC this afternoon ahead of #MUNCHE. pic.twitter.com/WbnIkO6jWd

Jose Mourinho scarves on sale at #MUFC… Fancy one of those or a half and half number? https://t.co/k85xAuOAaR pic.twitter.com/DG4GEd3ugZ