Manuel Pellegrini is keeping his cool amid growing reports that Pep Guardiola will replace him as Manchester City’s manager.

Guardiola announced on Tuesday that he will be moving to England for his next challenge and already has offers from Premier League clubs on the table.

[ MORE: Guardiola heading to the PL ]

City are the bookmakers favorites to land the current Bayern Munich and former Barcelona boss, despite Pellegrini still being in charge and leading the Sky Blues to a serious title challenge.

Ahead of City’s Capital One Cup semifinal first leg against Everton on Wednesday, Pellegrini, 62, was asked about his future and if winning the title this season would keep him in a job at the Etihad Stadium.

His answer, as is often the case, was perfectly delivered in a thoughtful and precise manner.

“I think that if you are the owner of a club, you must have the option to replace the manager if they win the title or if they don’t win the title. It just is about your trust in the way you work. That is more important than if you win a title or not for the owners.”

Pellegrini is quietly becoming one of the most likely managers in the Premier League as despite appearing to have the grim reaper following him around every single day ahead of Guardiola’s likely arrival, the Chilean has stayed professional, focused and calm.

He also still has the chance to win four trophies this season as City are in the semifinals of the League Cup, the last 16 of the UEFA Champions League where they face Dynamo Kiev and are third in the PL table, just three points behind leaders Arsenal at the halfway stage of the season.

Even if Guardiola arrives in the summer at City, the fans will not forget the man who led them to the title and League Cup in 2013-14, three-straight appearances in the UCL knockout rounds and even last season in a down year they still comfortably finished in second place.

The banner below sums him up. 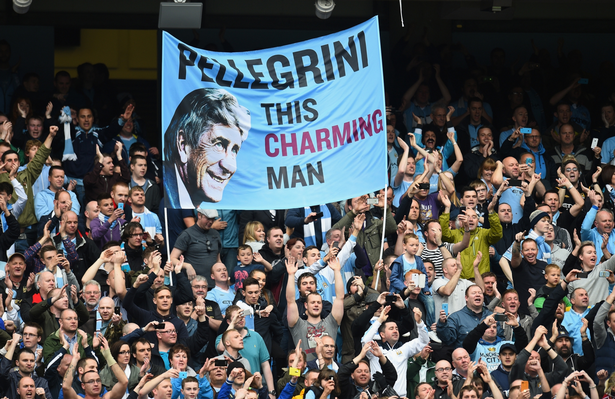