Liverpool’s injury list just keeps on growing and the Reds will be missing all four first-choice center backs on Friday down in Devon. League Two Exeter City know they have a big chance to cause an upset, as a string of hamstring injuries have caused Jurgen Klopp plenty of headaches over the past few days and the German coach — who spoke out against the congested schedule in England over the festive season — has been forced to recall Tiago Ilori and Kevin Stewart from loan spells.

“It is a big tournament and we have a big respect for it,” Klopp said. “We have to find a solution. If we go out, you have to criticize us, no problem, but we have to think about more than only one game. Everyone wants to see the sensation [of an upset] and if this is a chance for Exeter, then they have to take it. I saw after the rain the pitch is not in the best shape. The dressing room should be small, I heard, so maybe we should not spend the longest time in it and go out and play football.”

The Grecians have lost four-straight games heading into this clash but the home fans will be fired up for an FA Cup upset as they kick off the third round on Friday (2:55 p.m. ET).

If it’s one thing we all love about the third round of the FA Cup, it’s an upset. The typical David vs. Goliath story has happened in recent seasons with Chelsea being knocked out by third-tier Bradford City last season and fourth-tier Cambridge United taking Manchester United to a replay. This weekend the upsets might not be as glamorous but some Premier League teams won’t have the best of sleeps ahead of some tricky clashes against lower-league opponents.

Aston Villa — without a win in the league since Aug. 8 — are rock-bottom of the Premier League and heavy big favorite for relegation to the Championship. Their trip to Wycombe Wanderers, sixth in League Two, screams of an upset. Remi Garde probably won’t rest his regulars as they try to gain some momentum. Last season’s runners up will head to Adams Park with a sense of foreboding before the whistle is blown for the first time. Another PL struggler heading away from home to League Two opposition is Swansea City. This week the Swans appointed caretaker boss Alan Curtis until the end of the season despite chairman Hew Jenkins searching far and wide for a replacement for Garry Monk but not being able to find one. Hearing that most candidates “didn’t want to put their reputations on the line by joining a club at the wrong end of the table” tells the whole story. Swansea are only worried about one thing this season: Premier League survival.

Spurs vs. Leicester City – Part I

On Sunday at White Hart Lane Tottenham host Leicester City. Three days later they do it again at the Lane in the Premier League. Two of the in-form teams in the PL will put on quite a show and it will be intriguing viewing to see how each team approaches this first battle. Earlier in the season these two teams drew 1-1 in an end-to-end cracker which saw Dele Alli and Riyad Mahrez trade late goals. 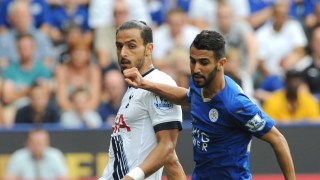 Spurs are currently in fourth in the PL after winning three of their last four and losing just once since the opening day of the season. Leicester — currently in second place — failed to score in any of their three festive fixtures and are sliding a little but progress in the FA Cup will be on the minds of both teams as they aim to seal a top four finish and battle for silverware. For Spurs that seems much more attainable than Leicester, but let’s see what the next three days bring before we make a more concrete judgement. The only shame about this clash is that Harry Kane will likely play for Spurs but Jamie Vardy, Leicester’s talisman during their sensational campaign so far, will be missing through injury. Seeing the England internationals go head-to-head would’ve made this tasty tie tastier.

Every year the FA Cup throws up one team everyone falls in love with. This year it could be Eastleigh FC. The National League side (fifth-tier) are the only non-league side left in the FA Cup and they host struggling second-tier outfit Bolton Wanderers at their Ten Acres home. What’s that? Oh, you can smell it too? That’s right, it reeks of an upset. Former Premier League side Bolton — they were relegated in 2013 — are currently $251 million in debt and in real danger of being relegated to the third-tier. You can forgive them if Neil Lennon fields a weakened team. And he will. The Trotters are more focused on staying in the Championship.

As for Eastleigh, they are battling for promotion to League Two and their young manager Chris Todd — a leukemia survivor who has tried his hand at acting, operatic signing and much more to make the most of his newfound life — the Spitfires have been bankrolled by a wealthy investor and possess plenty of players with Football League experience. On Saturday evening they could also be in the fourth round of the FA Cup and become the fairytale team everyone is talking about this year.

Programmes have just arrived ! Pop down to the club shop to get yours ! #spitfires pic.twitter.com/nf0cMnfrJ5