With Chelsea moving away from the Premier League’s relegation zone after a big win at Crystal Palace and three games unbeaten over the festive period, things are moving in the right direction. Up.

One man who has been instrumental in the recent revival is unsung hero John Obi Mikel, who interim boss Guus Hiddink has selected to shield the defense. Mikel did so admirably in a man of the match display against Palace last time out with the Nigerian midfielder lauded by Chelsea’s supporters during and after the much-needed win.

Below is the feature article on Mikel from Chelsea’s magazine ahead of their FA Cup third round clash against third-tier Scunthorpe on Sunday.

Our man in the middle

As the Blues get going in the FA Cup against Scunthorpe, John Mikel Obi explains why he is ready to make a major impact in the second half of Chelsea’s season

The defense-splitting pass was played beautifully and incisively by Cesc Fabregas; the powerful run, followed by an unselfish cut-back to the edge of the six-yard box, were provided by Diego Costa; and the side-footed finish was added by Oscar. Yet the opening goal in our 3-0 win over Crystal Palace also owed much to John Mikel Obi, whose presence in the middle of the pitch was of key importance as Chelsea gradually gained control of what began as an open game.

Prior to Fabregas’ through ball, Mikel had found himself under pressure in possession from an energetic Palace midfield inside the center circle, but in time-honored fashion he strong-armed the players pressing him, turning while simultaneously shielding the ball until he found an outlet.

His subsequent pass was a simple one but his composure was enough to set us on the way to taking the lead. It summed up a performance which led to considerable praise for the Nigerian holding midfielder, not least from the travelling Blues supporters who sang his name for much of the second half in south London.

“It’s nice to hear that,” he said after the game, “but we’re all a team and it was a great performance. We played very well and got the goals.”

Guus Hiddink was also keen to point out what Mikel offers the team, discussing the value of having a steadying influence such as him at the base of a very creative midfield.

“He’s the ideal player to bring balance to the team,” the manager explained. “I thought John Obi can be one of the key figures in getting the balance back. He can recover the radar. He knows the game very well. He knows where the strength of the opponent is and he knows exactly how to cope with that. He has a very good eye, a very good nose.
and a very good sense of where to recover.”

Reflecting on his manager’s comments and the importance of maintaining the balance of the team, Mikel offers his own take on his role.

“With the talent and the speed we have in front of me – on the wings, at No. 10, the striker – it’s important to always have people there who can help out the defene and keep the balance. You need someone there who can cover to keep the shape and win the ball back. I think that is the job I’ve done here for 10 years and I will continue to do it as long as I’m called upon to play.” 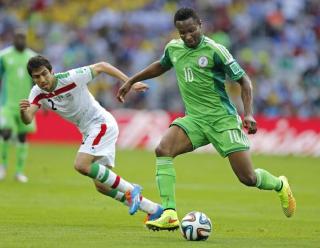 Mikel adds that there is an element of “sacrifice” to such a role, as he must curb the urge to burst up the field and join every attack, particularly if one of the back four has gone forward. But there is nothing dull about holding your position in the thick of the action, making split-second decisions which can help to recover possession if you get it right, or allow your opponent space to run at your defense if you get it wrong.

“You’re always doing something,” he says. “You do not stop because you are either trying to help out the defenders, the striker, or the wingers, and you’re trying to do your job in the middle! I’ve tried to express myself in possession a little bit more, but at the same time you don’t want to leave the space open because then the team will suffer. I’ve always said the team comes first, rather than individual glory, and I will continue to do that. Sometimes people don’t see that – they always see who puts the ball in the back of the net.  But, hey, this is sometimes what you have to sacrifice to do your job. As long as we get the results then it’s fine.”

People certainly noticed Mikel’s contribution last weekend. The 28-year-old’s performance was scrutinised in the post-match TV analysis and on the late-night highlights package and three beaming fans were picked up by the cameras at Sunday night’s PDC World Darts Championship final holding up placards that read “John”, “Obi” and “Mikel” respectively.
Mikel can already say he has won every major domestic and European competition since arriving at Stamford Bridge almost 10 years ago. It seems he can now add cult hero status to his list of honors at Chelsea.

More importantly, he is looking to add a fifth FA Cup winners’ medal to his collection – something that only a handful of footballers have achieved in the history of the game.

How does he feel about his relationship with this competition?

“It’s not bad,” he grins. “It’s a trophy we always try to win and if I can add my fifth medal, it wouldn’t be a bad shout would it? This is only the start of the FA Cup, though, and we are trying to forget what happened last year against Bradford. We always treat each game in the same manner and with the same concentration. We will approach Scunthorpe in the same way and try to make sure we win this game. With West Brom and Everton coming here in the next week as well, I think it will be good to have three games at home and it will definitely help if we can win all of them to keep the momentum going now because I think we’re going in the right direction.”