Lionel Messi won the 2015 FIFA Ballon d’Or award given to the Men’s World Player of the Year on Monday, with the Barcelona and Argentina striker accepting the honor in Zurich, Switzerland.

After an injury-hit 2013-14 season heading into the 2014 World Cup, last season Messi tore it up and has now reclaimed his spot on top.

The Barcelona superstar led his club side to an historic UEFA Champions League, La Liga and Copa del Rey treble during the 2014-15 season, scoring 57 goals in 58 games in the club campaign.

In the 2015 calendar year Messi scored 52 goals and added 26 assists in 61 games for club and country. He scored 34 goals in 33 La Liga appearances.

USWNT and Houston Dash midfielder Carli Lloyd was named FIFA Women’s World Player of the Year for 2015 as the player who scored a hat trick in the USA’s World Cup final defeat of Japan was duly rewarded. 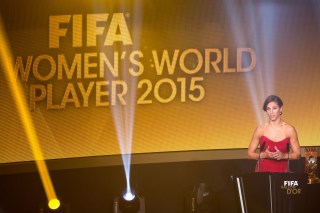 Other award winners on the night included USWNT head coach Jill Ellis, who was named FIFA Women’s World Coach of the Year for leading the U.S. to the 2015 Women’s World Cup title, while Barcelona’s manager Luis Enrique was named FIFA Men’s Coach of the Year for guiding Barcelona to the treble. The 2015 Puskas Award — given to the player who scored the best goal of the year according to voting — was awarded to Brazilian Wendell Lira for his incredible swiveling scissor kick.

The FIFPRO 2015 World XI was also announced, as professional players across the globe voted for their Best XI.

German international Manuel Neuer (Bayern Munich) was the goalkeeper selected, while the defenders were made up of Brazilian trio Thiago Silva (Paris Saint-Germain), Marcelo (Real Madrid) and Dani Alves (Barcelona, plus Spaniard Sergio Ramos (Real Madrid). In midfield Croatian Luka Modric (Real Madrid), Spaniard Andres Iniesta (Barcelona) and Frenchman Paul Pogba (Juventus) made the cut, while up front the three finalists for the Ballon d’Or, Messi, Cristiano Ronaldo and Neymar, put the cherry on top of a remarkable side.