Wayne Rooney put United 1-0 up and Jesse Lingard made it 2-0 but Georginio Wijnaldum made it 2-1 before the break and a Aleksandar Mitrovic penalty after half time made it 2-2 then a stunning last 10 minutes played out.

First Rooney curled in a magnificent strike to make it 3-2 but Paul Dummett hammered home via a deflection as the clock ticked to 90 to grab Newcastle a deserved point and send the home fans wild.

With the point United moved to 34 points, while Newcastle move to 19 points.

Rooney gave United the lead after nine minutes with a penalty kick following a handball from Chancel Mbemba in the box as his hands were in an unnatural position despite his back being turned. United’s skipper slotted home the kick with ease to make it 1-0 and Newcastle had shot themselves in the foot.

Rooney had another chance to make it 2-0 but when clean through put his effort wice of Rob Elliot and the goal, then Newcastle had a big penalty appeal turned down as Lingard looked to have fouled Daryl Janmaat in the box but referee Mike Dean waved away the appeals.

In the 38th minute United made it 2-0 as they launched a lightning-quick counter which saw Rooney delicately play in Lingard who overlapped and slotted home to double the Red Devils’ lead.

Before the break Fabricio Coloccini drilled a shot just over the bar and then the Magpies pulled a goal back as Coloccini’s clipped ball into the box towards Mitrovic was deflected off Marouane Fellaini‘s head and the onrushing Wijnaldum swept home. 2-1. Game on.

In the second half Newcastle came flying out of the traps and Moussa Sissoko turned Ashley Young inside out before forcing a good save from David De Gea at his near post as the Spaniard stood his ground well.

United continued to look dangerous on the counter and after a sweeping move Lingard popped up at the back post but sent his curling effort over the bar with the goal gaping.

They were made to rue that missed opportunity as a corner from the right saw Chris Smalling inexplicably pull Mitrovic’s shirt up over his head and a penalty was awarded which the Serbian striker slotted home. 2-2. 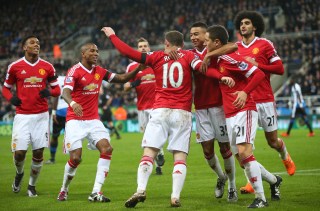 Wijnaldum had a goal disallowed after straying offside following a stray pass from Matteo Darmian being picked off. In the closing stages, despite Rooney breaking away and Coloccini denying him, Newcastle looked more likely to grab all three points but the game-winning moment arrived from their skipper.

Substitute Memphis Depay cut in from the left flank and his blocked shot found Rooney who curled home an unstoppable shot into the top corner for his second and United’s third of the game.

Late on Fellaini should have wrapped up the win but Elliot saved his header at point-blank range at the back post and then Newcastle equalized in the final minute of regulation as a cross found its way to Dummet on the edge of the box and his shot deflected off Smalling and flew into the corner. 3-3 and a breathtaking game ended with the points shared at St. James’ Park.