Well, that was fun.

Manchester United drew 3-3 at Newcastle United on Tuesday with a late Paul Dummett strike sharing the spoils in a pulsating clash.

Fans of Manchester United may not be too delighted with the way their team defended but going into this game they had only seen their team score five times in their previous seven Premier League outings. They scored three in 90 minutes with Wayne Rooney scoring twice — the second an absolute belter which you can watch here, and above — and Jesse Lingard netting another, plus Lingard and Marouane Fellaini should’ve both scored in the second half.

United did something they haven’t really done all season: they went for it. Van Gaal, 64, has come under fire for his side playing predictable, boring, possession-based soccer but that all went out of the window at Newcastle as ditching the laborious approach almost paid off. Sure, United didn’t win and individual errors at the back (Chris Smalling‘s ridiculous shirt pull on Aleksandar Mitrovic for the PK which led to the second goal and failure to clear the cross which Dummett scored the equalizer off) cost them but LVG may, strangely, gain more praise from his critics after the gung-ho approach. He even admitted himself on Tuesday that he has been bored by his own side in recent weeks. There was nothing boring about this display on Tuesday. Period.

Why weren’t United boring this time out? Well, their approach changed slightly with the Red Devils not dominating possession like they usually do — United only had 46 percent of the play when they’ve been well up in the 60 percent range for most of their outings this season — as Van Gaal’s side sat back and preferred to launch counters. Lingard’s pace and Rooney’s weight of pass saw them get in-behind multiple times in each half and United may have found a perfect way to play with the players at their disposal.

3 – Wayne Rooney (3) has scored as many Premier League goals in his last two appearances as he did in the previous 23 combined. Rejuvenated.

Lingard’s goal was a perfect example of that as Rooney raced clear and waited for the right moment to delicately slot the academy product in and United were 2-0 up. Lingard had a glorious chance in 55th minute to make it 3-1 but curled his shot just over after a similar counter and the fact that United could spring these breaks time and time again suggested it’s something they’ve been working on in training. Newcastle’s defensive unit isn’t they best they’ll come up against in the PL but something had to change and United’s approach was more positive, yielded more chances and, most importantly, resulted in more goals.

Say what you want about Steve McClaren‘s side but one thing that can’t be denied is that this team has two player with real class: Georginio Wijnaldum and Mitrovic. The duo came to the Magpies’ rescue once again — with their goals crucial in the wins over Liverpool, Tottenham and Norwich, plus the home draw against Chelsea this season — as they snagged a point to give themselves something to grab on to as they continue to bravely battle against relegation. Over the festive period Newcastle lost three-straight games 1-0 but on Tuesday the shackles were off and, like United, they looked dangerous on the counter and forced the issue more, especially in the second half as they attacked the Gallowgate End. 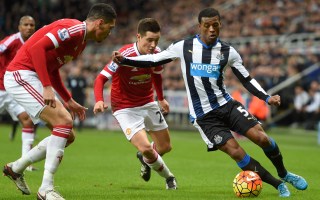 Wijnaldum grabbed the first at a crucial point just before half time to drag Newcastle back into the game as the Dutchman latched onto a loose ball, after Mitrovic had battled with Fellaini in the air, and netted his eighth goal of the season. Mitrovic then won and scored the PK to make it 2-2, causing a nuisance of himself in the box which led to Smalling hauling him down, and then Wijnaldum had another goal correctly chalked off for offside. They were a handful and with Jonjo Shelvey signing for Newcastle on Tuesday McClaren is assembling some real quality throughout the spine of his team. With the quality they possess, at least individually, Newcastle should be much higher in the table. Right now the quality of Wijnaldum and Mitrovic are keeping them in with a chance of escaping the bottom three and their arrivals in the summer seems like money extremely well spent.