The Manchester City players will not be distracted by the impending arrival of Pep Guardiola and will instead remain focused on sending Manuel Pellegrini, their current manager for whom they love playing, out with another Premier League title to his name, Joe Hart has insisted.

Speaking to reporters following Tuesday’s 1-0 victory away to Sunderland, Hart spoke on behalf of his Man City teammates and threw every ounce of support possible behind the outgoing Chilean, calling Pellegrini “a top manager” and revealing “the players think the world of him” — quotes from the Guardian:

“We are a professional group. We really enjoy playing under Manuel. He has been a top manager for us. His man-management has been something that I personally have really enjoyed, so we are going to look to give him the best send-off, what he deserves.

“Next season will take care of itself. Right now, we are living in the moment. Manuel Pellegrini is our manager and we are going to try to win as many competitions as we can with him.”

Just yesterday I tossed around the narrative that the City players could be distracted by Pellegrini’s departure, thus slipping up in this season’s title race, or it would be a galvanizing moment for the squad en route to lifting the PL trophy on the final day of the season.

Pellegrini already has one PL title to his name (2013-14) and, though Leicester City currently lead the league, the Sky Blues have to be considered slight favorites, at least, to claim their second title during Pellegrini’s three-season tenure — more from Hart:

“We know if we win our games, then we will win this league. We are three points behind Leicester with not a bad goal difference compared to them, so Arsenal dropping points helps.

“There’s a long way to go, there’s all sorts left to happen. We are in a lot of competitions, we need people coming back fit, which is happening, so we are going to be in a good place.” 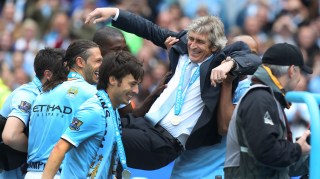