LONDON — Looking focused yet mellow, Memphis Depay was honest when asked about his start to life at Manchester United and in the Premier League.

Simply put: he expects more from himself and knows he hasn’t delivered. Yet.

Memphis, 22, joined United from PSV Eindhoven last summer after taking the Eredivisie by storm but has only scored six times in 33 appearances in his debut campaign in England as his struggles have coincided with those of his club who currently sit six points off the top four and are fighting for a spot in the Europa League Round of 16. Hardly ideal for Memphis or Manchester United.

Speaking to a small group of journalists at an underground venue in London, (in conjunction with Under Armour) as trains rumbled rhythmically overhead Memphis was softly spoken. He was loud and clear when stating his best is yet to come but admitted he hasn’t lived up to his own lofty expectations after arriving at Old Trafford for a huge fee of $37.5 million this summer.

“No, not yet. I know that and I will continue to fight for it. I have a lot of expectation from myself, that is important, and the club and I are busy trying to improve it,” Memphis said. “I don’t want to put a date on it [when I will be up to speed] but it will come, confidence will help, as will my experiences and learning from my mistakes. Belief in myself is also important. Those moments will come, I am focused on that.”

Staying focused will help the youngster get there — which isn’t easy as criticism continues to flow for not only him but his teammates plus manager Louis Van Gaal during a disappointing season so far — but also having one of the greatest wingers ever to play the game as your assistant coach should give you a further nudge in the right direction.

“Ryan Giggs is a legend,” Memphis said. “He talks a lot with me and gives me advice to equip me. He has experienced everything already so he helps with all kinds of things, he works a lot with me. [Working with Giggs] makes me even hungrier on the training ground, it makes me want to try new things. I ask him for advice because he’s been there; he knows how to read the circumstances, how to handle situations. It is really inspiring and, at the same time, helpful.” 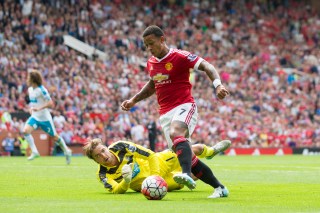 Memphis also revealed United’s captain and talisman Wayne Rooney has been helping him out on the training ground and even though his struggles have been well documented, the Dutch national team forward is still young and has time to turn things around. Confidence is huge for any player and it seems like Memphis is lacking some of that recently after Van Gaal has put him in and out of the team this season, used him in various roles both centrally and out wide, plus small injuries have curtailed the flying Dutchman’s progress.

That said, Memphis still remembers just how far he has come in such a short space of time and believes he is still developing both physically and tactically as a player.

Speaking about United’s hopes to end the season on a high, Memphis still believes they can sneak into the top four and win some silverware with winning the Europa League and FA Cup still a possibility.

“Of course in football anything is possible. We have to stick together and fight for every game that comes. We have to give 110 percent which each other. That is important,” Memphis said. “He [Van Gaal] is on the pitch doing the practice and he wants to see us improve ourselves, so he is really out there to work on everything. That is positive.”

One of the biggest factors for Memphis to master is to continue to adapt to the increased pace and power of the Premier League, with the Dutch winger admitting the topsy-turvy nature of the PL has surprised him as everybody appears to be capable of beating everybody this season.

“It is about quick decisions because the ball is under pressure every second every team tries to put pressure directly,” Memphis said. “Especially when you attack, you have to be creative. You have to think fast. It is what I have to improve to be a better player. I think it will come with experience, the more games you play the more of a feeling you get for it and the smarter you’re going to be.”

“It is really quick [the Premier League] and everyone puts pressure on you. Sometimes the whole defense puts pressure on you but they don’t see the running man so it has positive things you can see happen because they don’t put pressure in a smart way and somebody is free so you can play it out. That is also what I see in the Premier League. It is about decision masking being faster.” 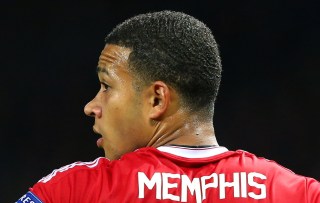 Speeding up his understanding of the game is something Memphis plans to do in the coming years to prove his worth at Old Trafford and become a key figure in United’s resurgence.

“I have really had to change my game because in the Eredivisie I could do what I wanted as I had time on the ball, I played on feelings. Here [in the Premier League] there is direct pressure so it’s hard,” Memphis said. “This has affected my game a little bit – everyone can see I’m not scoring every game like I used to but I can feel it getting better and, as I get to know the Premier League more, I feel better and my confidence is growing again.”