Chelsea continues to surge up the Premier League table and is 11 games unbeaten since firing Jose Mourinho in December.

The Blues beat Southampton 2-1 away from home on Saturday, as interim boss Guus Hiddink has done much more than simply steady the ship at Stamford Bridge.

With 11 games of the 2015-16 season to go, Chelsea has a great chance of finishing in the top six despite all of their problems in the early months which saw the reigning champs battling relegation instead of challenging for the title.

A top half finish seems highly likely, but can they do more than that?

With 33 points still to play for, there’s an outside chance that if one of the current top four crumbles then the Blues could sneak in to the UEFA Champions League spots.

It will still be a big ask and take a lot of slip ups from others — they are 11 points behind fourth-placed Man City who also have a game in hand — but Chelsea has momentum and as we saw against Southampton the spirit is back and they continue to dig deep to gain points which has now seen them climb to 11th place in the standings on 36 points.

Looking at the schedule above, it’s easily to see Chelsea winning their next five-straight PL games. Seriously. Look at that.

In their final six matches of the season they face three of the current top four but host all of Manchester City, Tottenham and Leicester at Stamford Bridge. Considering they recently beat Man City’s weakened outfit 5-1 in the FA Cup, they’ll be feeling good about facing Manuel Pellegrini‘s side. Plus, they’d love to scupper Tottenham’s title hopes in late April (if that’s still a thing) and the final day clash against Leicester seems incredibly intriguing as Jamie Vardy and Co. may arrive in west London needing a win against the defending champs to seal an unlikely title.

All of this is hypothetical but what we can clearly see is that Chelsea is rolling. Diego Costa looks dangerous up front. The defense is settled even when John Terry is out. Their is balance in midfield with John Obi Mikel and Cesc Fabregas dovetailing. Plus, Willian is on fire and Eden Hazard and Oscar are getting back to their best slowly but surely. 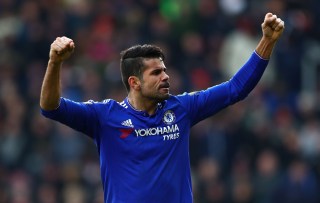 If Antonio Conte does arrive to take charge of Chelsea for the start of next season he won’t have to clear house but he can bring in a couple of top class players to compliment this group. Conte, if he does take the job, will also be hoping the group he inherits will be playing in the Champions League next season. That can happen two ways, and winning the UCL to qualify for next season still seems the most likely, yet incredibly difficult, route.

Chelsea has a big UCL Round of 16 second leg game coming up against Paris Saint-Germain on Mar. 9 where they only trail 2-1 from the first leg in Paris, plus they have an FA Cup quarterfinal at Everton on Mar. 12.

Battling for cups and surging up the table, Chelsea may not finish in the top four this season but they are slowly returning to the team we all know they were. Hiddink deserves huge credit for the turnaround but question marks will surround the group of players who were so poor under Mourinho for the opening half of this season.