WHAT IS GOING ON?

The only thing we learned from the midweek slate of games is that this madness is set to continue.

With Leicester, Tottenham, Arsenal and Manchester City all dropping points — leaders Leicester were the only side to grab a solitary point — the seemingly closed shop for a top four spot has now reopened with Manchester United and West Ham United joining the party.

Welcome to the Madhouse.

Look at the standings below and tell me who finishes where and why. Your guess is as good as anyone’s with 10 games to go.

Leicester were unlucky to not grab all three points from their clash against West Brom on Tuesday but drew and that small slip up let in the door for the likes of Tottenham, Arsenal and Man City to close the gap on Wednesday.

It’s status quo at the top with nerves seeming to get to Spurs, the Gunners in a rut with three defeats on the spin and Man City suffering from their UEFA Champions League and League Cup final hangover. 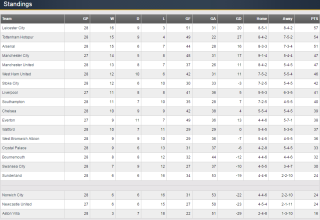 You’re aware of this by now (of course you are!?) but this season has been infuriatingly and brilliantly unpredictable.

With 10 games left, there’s no sign of that letting up. The picture at the top of the table will only begin to become more muddled this weekend as title contenders clash at White Hart Lane in the North London Derby with both Tottenham and Arsenal eager to make up the ground they lost on Leicester in midweek.

Speaking after Tottenham’s defeat to West Ham, Mauricio Pochettino half shrugged and laughed… but looked like he wanted to cry as he was asked why everyone is beating each other.

“The Premier League is the most competitive league in the world. You can see this every week,” Pochettino said.

This crazy show will continue until mid May when a champion will be crowned. I ask you: does this season have to end?

Under the lights at Upton Park on Wednesday, the Hammers pressured Spurs from the off and beat their bitter rivals in an intense atmosphere in east London.

The historic venue was rocking after just seven minutes as Michail Antonio continued his hot-streak and now has six goals in his last seven games at the famous Boleyn Ground. This place will be sorely missed but after climbing to just one point of the top four, West Ham’s move to the Olympic Stadium next season could be met with UEFA Champions League action.

Sure, Man City has a game in hand on the Hammers and Manchester United is one point ahead but West Ham got their tactics spot on against Spurs, crowding out the midfield and playing wing backs to nullify the threat of Spurs’ wide men. Their fight and determination was relentless.

Ask the fans, Slaven. They certainly are. After yet another gritty and determined display with Dimitri Payet pulling the strings and a growing number of options in attack as players continue to return from injury, the Hammers could come from nowhere and mount a serious challenge for the top four.

As for Spurs, it was a night to forget for Mauricio Pochettino on his 44th birthday.

The Argentine boss bemoaned the slow start from which they never truly recovered. Harry Kane missed their best chance in the second half, while too many giveaways in bad errors on a bobbly pitch exemplified their struggles. Kevin Wimmer could’ve been sent off for hauling down Emmanuel Emenike and Tottenham’s decision to rotate their full backs hurt them. Given the madness elsewhere, Spurs’ failure to move top of the table is only a minor setback. After six-straight wins in the PL and going unbeaten away from home since the opening day of the season, they had an off day at Upton Park against their rivals.

Pochettino didn’t seem too worried but he’ll be expecting a big reaction from his team when they host north London rivals Arsenal on Saturday at White Hart Lane (Watch live, 7:45 a.m. ET on NBCSN and online via Live Extra).

Speaking of the Gunners, they have now lost three on the spin in all competitions for the first time since 2010. Arsene Wenger‘s men are struggling.

On Wednesday they went down 2-1 to Swansea City at home as the Welsh outfit once again proved to be their bogey team and put a big dent in their title hopes. The loss was bad, of course it was. If they had won — which could’ve easily happened had Alexis Sanchez’s free kick not cannoned off the bar with the scores locked at 1-1 — then they’d be level on points with Spurs going into Saturday’s derby. That said, they’re only three points behind Tottenham and six points behind Leicester. It’s not over, but they must win on Saturday to keep their title hopes alive. It’s as simple as that.

The biggest loss for Arsenal on Wednesday came with the news that Petr Cech will be out of the NLD after injuring his groin when trying to run up for a late corner kick. David Ospina will come in but Wenger has lost the leader of his defense in yet another damaging blow.

Given their recent PL form, Manchester City’s 3-0 defeat at Liverpool on Wednesday shouldn’t have been a surprise. Pellegrini’s men looked jaded after the League Cup final victory over Liverpool on Sunday at Wembley (perhaps they partied a little too hard?) and the manager admitted a long few weeks is catching up with them. City now sit 10 points off Leicester and even if they win their game in hand it will only reduce the gap to seven with 10 games left.

Winning the title should not be at the forefront of their mind anymore. Finishing in the top four should be the main objective as the likes of West Ham and bitter rivals Manchester United line up behind them and are within a point of taking away City’s spot in the Champions League.

LVG’S BOYS GRIND OUT ANOTHER WIN

United left it late against Watford to win 1-0 on Wednesday, but Juan Mata‘s free kick did the business and Louis Van Gaal has now recorded his fourth-straight win in all competitions with an injury-hit side.

Van Gaal, 64, may well leave Old Trafford at the end of this season but he’s doing his best to leave the Red Devils in at least a top four spot and a piece of silverware in either the FA Cup or Europa League.

After United’s win over Watford, he posed with fans for photos for many minutes as he walked out of the stadium. Along with his touchline tumble against Arsenal last weekend, LVG is doing his bit to get the fans back on side. If City slip up against Aston Villa this Saturday and Manchester United beat West Brom on Sunday, they’ll be back in the top four. All those calling for Van Gaal to be sacked could well be eating their words in May as his side dig deep and continue to grind out wins at the business end of the season. The performances aren’t too impressive but it’s hard to say these players aren’t playing for their under-fire boss. That said, Jose Mourinho’s impending arrival this summer continues to cast a cloud of uncertainty over what lies in store for the future at Old Trafford.

It is utter madness.

But, that’s why we love it and this season is setting us up for one of the finest finales we’ve ever seen from top to bottom across the league.