The home sides went 7W-1D in the first legs of the Europa League’s Round of 16 on Thursday, with a total of just two road goals setting the stage for difficult home second legs.

Spurs were dominated in Germany, while Anfield was the site for a physically taxing match between Liverpool and Manchester United (Seriously… might want to expect United to struggle in Sunday’s FA Cup match versus West Ham).

Memphis took down Nathaniel Clyne on the edge of the 18 and Daniel Sturridge gave the hosts a lift just 20 minutes into an intense tie at amped-up Anfield. Arguable man of the match David De Gea made a big, one-pawed stop on Philippe Coutinho moments later as Liverpool pushed for a second.

That wouldn’t come until the second half, as the Reds doubled their advantage through Roberto Firmino. The Brazilian blasted a close-range shot past De Gea after Adam Lallana slipped him through.

A very tight match in Switzerland saw a total of four shots on target, with four coming from the reigning Europa League champion visitors.

Steven N’Zonzi was in line for man of the match honors until his second yellow card in the 87th minute led to this very weird poll on UEFA.com. 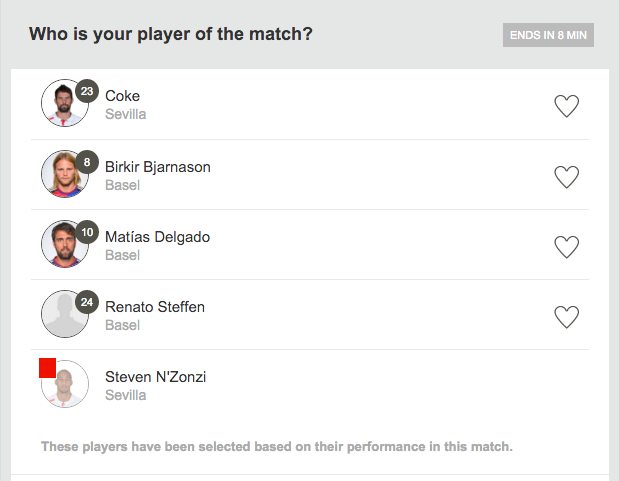 No heart for you, Steven. No heart.

Taison and Oleksandr Kucher scored three minutes apart in the first half to give the hosts a comfortable lead, but Ghanaian winger Frank Acheampong pulled one back for the Belgians 21 minutes from time. Eduardo added a third Shakhtar goal in the 79th minute.

Mehmet Topal struck late with an 82nd minute long dribble and finish to give the Turkish powers a slim advantage for the second leg in Portugal.

Roberto Soldado found Cédric Bakambu for a fourth-minute goal in Spain, and Villarreal was off to a quick start. Bakambu added another with a breakaway chance in the second half, and Bayer’s in trouble for leg No. 2.

Raul Garcia struck in the 20th minute to put Gary Neville’s side under the knife.

Martin Frýdek Jr. scored his second goal as a member of Sparta’s senior team, netting in the 13th minute to give Rudí an early lead (Both goals have come in Europa League play). Marco Parolo tucked away a rebound to even things up before halftime.