At 23 years of age, Paul Pogba has gripped the soccer universe. He’s played in a Champions League final, he’s been to a World Cup quarterfinal, and he’s won three Scudettos.

And yet, set up with the opportunity to make Juventus his team and put a stamp on his growing resume and transfer value, he came up devastatingly, agonizingly short as Bayern Munich completed a 2-goal comeback and won 4-2, moving on to the Champions League quarterfinals.

With midfield lynchpin Claudio Marchisio missing and the club’s other electric youngster Paulo Dybala also out injured, this should have been Pogba’s team. Except it wasn’t. The Frenchman scored in the sixth minute, but don’t let that fool you. He was on the business end of a failed clearance and poked it home, but was completely irrelevant following the goal.

First, it’s impossible to proceed without touching on Juventus manager Massimiliano Allegri, who got everything about this match completely wrong. In the absence of Marchisio, he brought an attacking-minded Hernanes back to cover the middle of the pitch, but still hoped to absorb pressure and play on the break. The Brazilian actually played well, but had too much freedom to cover the back line effectively in Allegri’s defend-and-counter gameplan. That left Pogba and Khediara to defend, which they did relatively well, but neutralized them up front. The Juventus goals came on a pair of laughable mistakes by the banged up Bayern defensive line, but Pep Guardiola proved his dominance in the second half.

Sami Khedira was invisible the entire match flanked next to Hernanes, and while Pogba saw more of the ball thank his German counterpart, he did little with the chances, forced back in defense too often. Allegri’s most venomous player, Alvaro Morata, was substituted in the 72nd minute while on a yellow, and his replacement Mario Mandzukic contributed nothing.

While Allegri set Pogba up to fail, the 23-year-old was predictably poor. Here’s his statistical dashboard from the match, courtesy of FourFourTwo’s StatsZone: 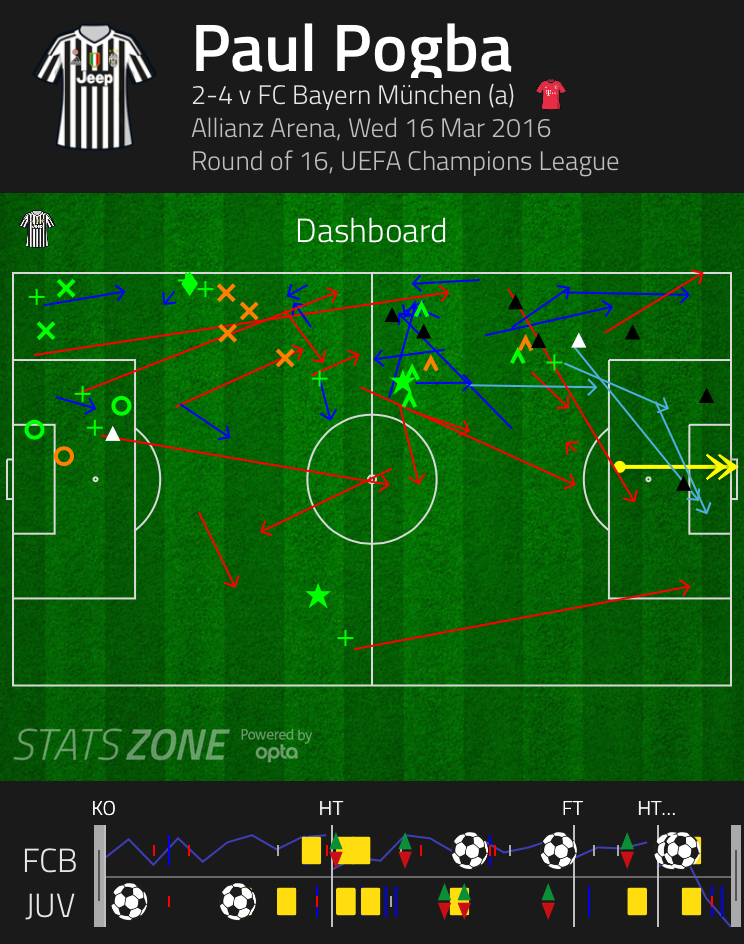 All those ugly red arrows combine for a 20/36 passing performance. Much of that came from pumping long balls forward in the second half, but even on short passes, Pogba was 20/30. In the first half, Pogba completed just five passes. To his credit, he created four chances across the match, two in each half, but that was the extent of his production. Not shown on that dashboard, Pogba received 34 passes, nearly all from the defensive line and collected just past the halfway line on the left flank. With too many defensive duties, he had little to give up front, as Alex Sandro was a much more influential player down the left.

Pogba committed seven fouls, all in the attacking half. Down the other end, he whiffed on four tackles in the Juventus half. He completed a pair of take-ons, but neither in the attacking third.

Compare this all to the first leg, where the presence of Marchisio allowed Pogba more freedom, and he thrived on the left. He still had plenty of defensive duties in that match, but had fewer worries about space behind him being exposed. As a result, he was more active and wasn’t locked down in the defensive half.

With the game set up in Pogba’s favor, his manager let him down, and it showed on the field. If Pogba hopes to be the dominant world-class midfielder he appears to be so often, performances like this won’t help.