MiB: How did AVFC California come to be? Give us your backstory.

AVFCC: AVFC California (also called the California Lions Club) was created in 2009 – the first official Villa supporters club on the West Coast. As an avid football fan, I needed to establish allegiance with a Premier League club. At the time, I was a volunteer at a children’s hospice in the SF Bay Area. After doing extensive “background checks” on every Premier League club, I discovered that Aston Villa had just established a partnership with Acorns Children’s Hospice in the UK (having Acorns on their shirts instead of a commercial sponsor for several seasons!). This fact and the amazing history of this club is what I believe as me “not choosing, but being chosen”. Over the next several years, our membership grew with many ex-pats and Americans. As out size grew to over 100 members statewide, new clubs in San Diego and Los Angeles “birthed” from the original club.

MiB: Give us a tradition, ritual that is uniquely AVFC California.

AVFCC: One tradition, not one unique to AVFC California, but one for all of our supporters clubs in North America – is our fundraising and support of Acorn’s Children’s Hospice. There are now many Villa supporters clubs throughout North America – we all gather annually for the first game of the season. In August 2015, Villa supporters from throughout North America gathered in San Diego, CA for our annual meet-up. Through the sale of event t-shirts and a huge raffle for Villa prizes and memorabilia, our clubs raise thousands of dollars for Acorns.

MiB: As someone who experiences almost every kick of the ball, how has the club coped with this difficult season?

AVFCC: This season has been a miserable one for Villa supporters worldwide. “Coping” is an excellent word to describe our priority as supporters. How do we do this? Lean on each other as fellow supporters and friends and also knocking down cold ones leaning on the bar at the Mad Dog in the Fog in San Francisco. Another coping mechanism is having the Golden State Warriors as our NBA team here in the Bay Area and wondering if Steve Kerr might be available to manage an English football club or if Steph Curry can kick a ball as well as he shoots one? Despite the performance on the pitch, we all stand in support of our club, no matter how painful the result. We are bracing for and preparing for the worst (“Who televises the Championship in the U.S.?). “I’m Villa till I die!” 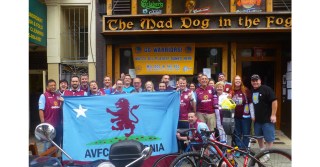