If Michelangelo were alive, we’d like to think his muses would be Premier League-related (Wayne Rooney’s hair transplant isn’t going to draw itself!). In this edition of Three Questions, we talk with an artist who is fortunate enough to ply his trade during an era when neck tattoos and ill-advised haircuts abound. Stanley Chow is a revered illustrator at The New Yorker. He also happens to be a massive Manchester United supporter with a side hustle sketching football characters (we’ll take 83 of those LvG prints, please). And to think it all started with an Edgar Davids retweet.

MiB: When did you start drawing footballers? Who was the first player you drew?

SC: It wasn’t until around 2008/9 when I started illustrating footballers at a semi-professional level. Wayne Rooney was the first player I did during this period and then George Best… I posted the Rooney on Twitter…. Inexplicably former Dutch International soccer player Edgar Davids saw the illustration retweeted it and asked if I could do one of him… before I knew it I had about 1,000 new followers on Twitter, after previously being on about 30… and that’s when I knew I was onto something.

MiB: Can you describe your process when you have decided on a subject, be it Lionel Messi or David Letterman. How do you go about deciding on your portrayal?

SC: I give myself one objective when I do an illustration and that’s for me to make sure that I have captured the likeness of that particular person… sometimes it will take half an hour to nail an illustration, sometimes it can take a few days (some people are just harder to illustrate than others) and then maybe I will add extra frills e.g. club badge and/or text to the image if I feel it’s necessary.

MiB: You are a Manchester United fan. Your illustrating skills have led you to portray so many of the club’s legends and current heroes… Bobby Charlton, George Best, Sir Alex, Rooney, David De Gea, Schweinsteiger, etc. You were even commissioned to create an illustration of LVG for his birthday. How did you feel when you were approached to do this and what was your thought process when designing this image? 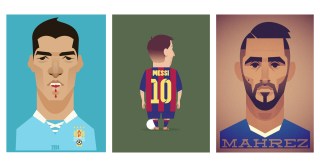 SC: Before and after every home game, the United squad stay at the Lowry Hotel to have breakfast and an evening meal. I guess the hotel management have quite a good relationship with United… so every now again if they know that a footballer’s birthday is coming up they will try and do something special for them… so I have been approached a couple times. It’s very flattering to be commissioned to illustrate someone and for that portrait to be given to the person you’re illustrating, but also quite stressful. I guess… you just hope that they like their portrait. I never usually illustrate a celebrity/footballer with the intention that they see it… most of the time I’d rather not know whether they like liked it or not… but if and when they do see it and like it, and it get backs to me, then that’s always a good feeling. So I believe LvG liked his… he described his portrait as ‘modern art’! I was also commissioned to do Giggs too for his birthday… no response came back to me. It pleases me greatly though that Juan Mata uses the one I did of him on his Instagram profile.

MiB: Is it harder to portray balds as you are deprived of such a key tool of depiction (hair)…

SC: To be honest with you I sometimes struggle with hair… As far as I’m concerned it’s ideal to illustrate someone with a bald head… you just draw a circle and you’re halfway there!