Soccer legend Johan Cruyff has died at the age of 68.

[ MORE: Cruyff most influential in history ]

Cruyff lost his battle with lung cancer and the iconic figure died in Barcelona on Thursday.

The former Dutch playmaker was a superstar as a player at Ajax, Barcelona and with the Dutch national team, before translating his ideas off the pitch for both Barca and Ajax following his illustrious playing career.

This is the statement posted on his personal website:

On March 24 2016 Johan Cruyff (68) died peacefully in Barcelona, surrounded by his family after a hard fought battle with cancer.

It’s with great sadness that we ask you to respect the family’s privacy during their time of grief.

Cruyff was a revolutionary figure in the game as his stylish play on the pitch has inspired the many generations of players who followed. He also played in the NASL for both the LA Aztecs and Washington Diplomats from 1979-81 before returning to Holland to finish off his playing career before moving into management.

In recent weeks there was positive news about Cruyff but after being diagnosed with cancer in October 2015 he has battled hard but lost to cancer.

The three-time Ballon d’Or winner won three European Cups and eight league titles with Ajax and one league title with Barcelona as a player, plus four La Liga crowns at Barca as a manager. He also led the Catalan club to their first-ever UEFA Champions League title back in 1992. 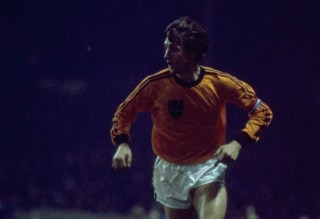 His famous “Cruyff turn” became known throughout the world and his ideas and playing philosophy has been used at Ajax, Holland and Barcelona as a footprint for their success with renowned managers such as Pep Guardiola a devoted student of Cruyff.

Barcelona’s famed La Masia academy was the brainchild of Cruyff as he aimed to replicate the success of Ajax’s youth system, and if it wasn’t for Cruyff we wouldn’t have players like Lionel Messi, Andres Iniesta and Xavi in the world today.

His influence spreads far wider than just a few outstanding players, though.

Despite the sad news about his passing, Cruyff’s legacy will live on forever as his influence on the game in Holland, Spain and the entire soccer world will never be forgotten.