Coinciding with Leicester City’s incredible rise to the top of the Premier League with just seven games of the season to go, there have been plenty of unexpected spin-offs.

Earthquakes have been recorded close to the King Power Stadium after goals were scored, the Foxes are all but certain of playing in the UEFA Champions League next season and Claudio Ranieri‘s side have been invited to play in the prestigious International Champions Cup preseason tournament this summer alongside the likes of Barcelona, Real Madrid and Bayern Munich.

Yeah, Foxes fans must be pinching themselves. Apparently, they are also going out and buying blue colored cars.

According to car manufacturer SKODA, they have been seen a huge rise in the sale of blue cars in Leicester in an unexpected spin-off from the Foxes’ success.

It turns out that during their surge towards the title this season, the citizens of Leicester have been buying cars which reflect the love of their club. Fans of the Philadelphia Eagles, do you own green cars? What about supporters of the Arizona Cardinals, do you have a red vehicle?

Here’s a statement from SKODA below:

Car manufacturer SKODA can today reveal that sales of blue cars in Leicester have shot up by 340 percent year-on-year. What’s more, the research goes on to show that the impact of a football team’s home shirt color on car sales can be seen across the country.

And here’s a snap of one of the many blue cars in Leicester parked outside the King Power Stadium. 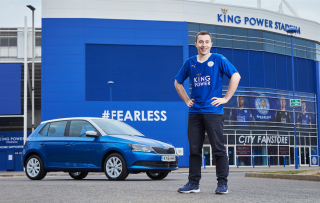