Unfortunately for USMNT coach Jurgen Klinsmann and the United States men’s national team, there aren’t European matches or even a full slate of MLS matches to take our minds off the carnage we witnessed last night Guatemala.

So we write more.

Disclosure: I love watching Major League Soccer and hope it continues its rise as a player in the world’s game. I also generally would prefer United States men’s national team members to be playing meaningful minutes at the highest level possible, and know that there are currently as many as 10 leagues in the world where that can occur — most of them in Europe — ahead of MLS.

It’s also important to note that Klinsmann’s roster omissions are not strictly MLS based. Defenders Jonathan Spector, Eric Lichaj and Tim Ream have not been given good chances to regularly play under his watch, and they play in England’s Championship (As an aside, I’d love to see a tournament between MLS and the Championship to settle some things). Destroyer of sorts Perry Kitchen is with Scotland’s Hearts and could’ve done a job in last night’s miserable loss to Guatemala.

And there’s a batch of MLS super fans, sometimes disguised as analysts, who dwell so heavily on which of their favorite domestic-based players aren’t being chosen by Klinsmann that it becomes near impossible to separate their legitimate gripes from the pathological features of their problems.

[ MORE: Why a Tuesday win would make everything pretty alright ]

Finally, there’s an argument to be made that Klinsmann’s sheer lunacy in Friday’s loss isn’t about player selection, rather where he put them (Michael Orozco aside. He doesn’t even start for his club).

Consider that Klinsmann’s absurd choices to play several players out of position would’ve looked much better and likely performed significantly better if they had just been lined up, well, adequately.

How they started vs Guatemala

Wouldn’t this have been better/more natural?

Even if he needed to go 4-4-2 and play Bradley as a No. 10, that still would’ve been preferable to putting Diskerud on the left than using Bedoya on the flip of his preferred right.

Now here’s the thing: there is absolutely no debating that MLS provides plenty of options at natural positions who could’ve been called up. Without delving too far into who I think is or isn’t good enough to cut muster, let’s assume Klinsmann wanted cover in a traditional 4-4-2. Which of these players wouldn’t have deserved a chance over playing a maximum of five players at their second-choice (at best) position?

Okay, so the right back ranks are extremely slim, but the point remains that bringing some of this crop would’ve helped supplement his team. Consider that of the players listed as defenders, five of the seven were center backs and Yedlin is clearly considered a winger.

It’s also almost like he doesn’t want to give a true DCM a run while Jermaine Jones is suspended, almost as if to say, “Don’t get any ideas guys, he’s mine forever.” And we know Matt Miazga and Tim Parker were with the U-23s and both John Brooks and Matt Besler picked up injuries, but what about Matt Hedges? Brad Evans? Chad Marshall? Either is preferable over Orozco, and it’s not like the Liga MX back is a spring chicken being prepped for the Copa America (He’s 30).

Here’s Orozco’s blistering form for his club from Transfermarkt (I almost feel bad… it’s not like the defender is demanding to start for his country. Klinsmann just called him up and plugged him. Was he supposed to say no?). 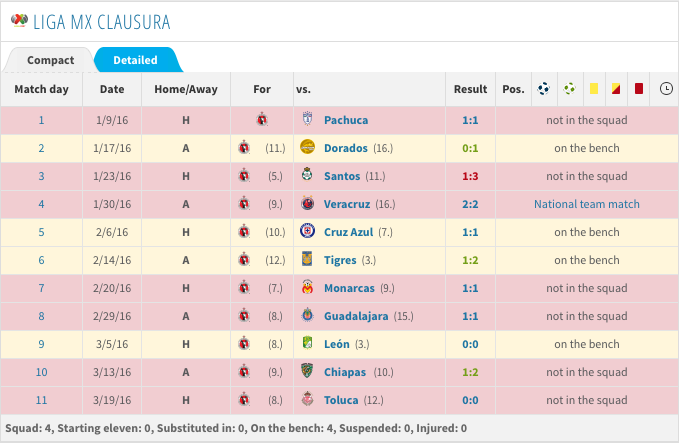 Look, I’m well aware of my limitations as a soccer mind in comparison to someone of Jurgen Klinsmann’s experience. That’s not a potshot. I’m not going to tell you m word is gospel, but these aren’t exactly lofty theories that I proffer.

What the heck is going on?