New FIFA president Gianni Infantino has spoken highly of the United States of America as a soccer nation and believes it will continue to go from strength to strength.

Infantino, 46, was voted in as FIFA’s new president in February after the extraordinary congress in Zurich to replace Sepp Blatter amid widespread corruption and scandal among soccer’s leading officials.

The Swiss official came from nowhere to win, and many believe that U.S. Soccer — led by Infantino’s good friend Sunil Gulati, while USSF backed him in the second round of voting — will benefit greatly from having a man they know very well in charge of world soccer’s governing body.

Many also say that with the 2018 World Cup in Russia and the 2022 World Cup currently slated for Qatar, plus the three World Cups before that in South America, Africa and Europe, it will be North America’s turn to host the World Cup in 2026.

In the video above Andres Cantor from Telemundo’s sports team, NBC Deportes, spoke with Infantino recently and asked if the U.S. is among the favorites to host the World Cup in 2026

“The United States could host the World Cup tomorrow,” Infantino said. “The infrastructure is there and the football of the United States has really progressed a lot in the last few years in the population. Women’s football is absolutely fantastic. I attended myself the final of the FIFA World Cup in Vancouver last year, it was a great celebration with a great national team. The men’s national team has been competing in the World Cup since 1990 so the results are there.”

“The population loves football as well as some of the other American sports, of course! But football is the best one and they will realize it very soon as well,” Infantino said, with a smile. “Let’s see how the process is going and if the United States wants to organize a World Cup as well because, first they have to submit their interest and a bid and then we will see.”

FIFA’s leader said the bidding process for the 2026 World Cup will be discussed during the upcoming congress in Mexico this May and we should expect it to begin soon after with countries willing to host the World Cup then asked to throw their hats into the ring.

Infantino was also asked if FIFA feels like it has a debt to the United States after the U.S. authorities sparked the ongoing investigations into widespread corruption which ultimately brought down Blatter and many senior officials, leading to the new structure at FIFA and Infantino as president.

“There is no debt, nothing close to a debt. These are two separate situations,” Infantino explained. “The process which has started in the United States is a process linked with some criminal activities around some football events mainly in South and North america but not only. Whoever commits a crime whether in the United States or Switzerland or anywhere else in the world has to be convicted by a court.

“From that point of view I am, and we are, all very grateful for what the authorities are doing in the United States, in Switzerland and in other countries as well because for us as a sports organization, only it is difficult to go into these kind of organizations. We are grateful for this. When it comes to the running of football, this is our job, our task, we have to show we deserve it. The organization of a World Cup is something different to criminal activities linked with the business of football.” 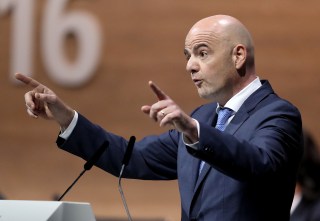 Asked if the U.S. would become more influential in FIFA moving forward, Infantino confirmed he has big plans for them.

Infantino and the president of U.S. Soccer, Sunil Gulati, have been close associates for many years.

Gulati was one of the first to congratulate Infantino when he was elected as FIFA’s president back on Feb. 26 and the Swiss official spoke glowingly about his close links with U.S. Soccer.

“It is of course true that the U.S. Football Federation supported me for the second round and this was obviously also very helpful in the election process. Having said that I have a great relation with Sunil Gulati and many other friends in U.S. Soccer since many years already,” Infantino said. “The election is a competition, sporting competition. It is over and now I am the president of all 209 associations. Big and small, east and west, and the U.S. is one of these 209 member associations, but an important one. I’m looking very much forward to working with Sunil and all of the other officials in the U.S.”