Liverpool and Tottenham Hotspur played out an entertaining 1-1 draw at Anfield on Saturday as Philippe Coutinho and Harry Kane traded second half goals.

Spurs pushed hard late on for the winner but couldn’t find it as they momentarily cut Leicester’s lead at the top to four points ahead of the Foxes playing Southampton on Sunday (Watch live, 8:30 a.m. ET on NBCSN and online via Live Extra).

Here’s what we learned from Anfield.

It was one of those days for Mauricio Pochettino and Tottenham.

Spurs started superbly with Harry Kane twice running through on goal and he hesitated as he tried to pick out one of his teammates rather than taking a shot himself. Dele Alli had a back header and a chest attempt on the run he got all wrong in the second half, plus Hueng-Min Son had a superb volley fly just wide. Tottenham’s attacking unit huffed and puffed but touches popped up and Alli’s performance epitomized how Pochettino’s youngsters just seemed to be off the boil.

22 – Harry Kane has now scored more goals in a Premier League campaign than any other Spurs player (22). Own.

Kane scored his 22nd PL goal of the season, more than any other Spurs player has managed in the PL era in a single season, with a magnificent turn and finish in one movement. That goal sparked Spurs into life for the final 30 minutes but they couldn’t quite find that winning touch in and around the box despite a much-improve display in the second half. Pochettino looked frustrated at the final whistle as he now knows that a Leicester win on Sunday will see them move seven points clear at the top. Spurs’ title hopes hang in the balance.

HUGO TO THE RESCUE

In the first half Hugo Lloris kept Spurs in the game. Daniel Sturridge went clean through one-on-one but Lloris saved with his legs, he then denied Son’s deflection towards his own goal and he tipped Adam Lallana‘s shot from the edge of the box wide. He also clawed another Lallana effort away majestically. Lloris, 29, is so often the unsung hero in this Spurs squad — Kane and Alli often get the plaudits — and if they hadn’t all but secured qualification to the UEFA Champions League for next season then it’s highly unlikely he would’ve still been at White Hart Lane. Europe’s best would’ve been clambering to sign him but Lloris is a steady presence on Spurs’ backline and has won them so many points this season. 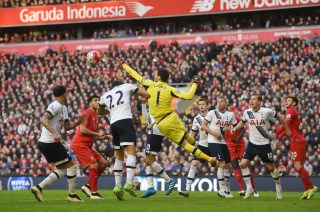 Lloris is right up there with Manuel Neuer and David De Gea as the three best goalkeepers on the planet right now. Thibaut Courtois was also in the conversation but with his long injury layoff this season and Lloris’ superb form, the French national team captain has overtaken him to be among the world’s top three stoppers. Tottenham’s forwards had an off day, for the most part, on Saturday but their ever-reliable last line of defense didn’t. Lloris showcased his incredible agility on Lallana’s fluffed volley (how did he get that left hand across in almost slow motion?) and the vast range of his skills elevates him to among the world’s best.

He’s a sweeper keeper who is eager to come of his line, but his quick reactions and incredible composure with the ball at his feet mean he has it all. Some question Lloris’ size but his vertical leap can’t be questioned and his is the undoubted leader of Spurs’ defense, the best in the PL.

Jurgen Klopp will be relatively pleased with the way his Liverpool side acquitted themselves on Saturday. Leading early in the second half and peppering Spurs’ goal at the end of the first, Liverpool’s relentless pressing from midfield was applauded throughout by Klopp on the sidelines. Jordan Henderson epitomized Liverpool’s workmanlike display as he and Emre Can shut down Alli and swarmed Mousa Dembele and Eric Dier whenever they got on the ball. Adam Lallana was causing plenty of problems and Coutinho was his usual creative self. However, Daniel Sturridge missed two glorious chances in either half and it will be interesting to see if Klopp starts him in the Westfalenstadion on Thursday in the Europa League. Sturridge’s work rate didn’t match that of his teammates.

Next week Liverpool and Klopp head back to the club where he made his name, Dortmund, and the Bundesliga outfit are heavy favorites to overcome the Reds in their Europa League quarterfinal tie. That said, matching the intensity of Spurs for over an hour will be a good way to warm up for Dortmund as Spurs emulate their style and endeavor closely. With Liverpool’s top four hopes in the PL fading, their best remaining hope to qualify for the UCL next season is winning the Europa League. Klopp has an emotional game coming up back in Germany on Thursday and with this good, but not great, point against title-chasing Tottenham his players seem to be up for the challenge of taking the game to Dortmund in the first leg.