As much as Everton would like to keep Romelu Lukaku beyond this season, the forward is said to be drawing interest from some of the world’s biggest clubs.

Only 22, Lukaku has enjoyed tremendous success since coming to Goodison Park on loan during the 2013-14 season, which later became a permanent transfer from Premier League side Chelsea. In his combined three seasons for the Toffees, the Belgium international has netted 62 goals across all competitions, including a staggering 25 goals during the team’s current season.

It is because of that production that Everton is reportedly slapping a massive price tag on the striker in an attempt to keep him away from would-be buyers. Among the teams showing interest are PL clubs Chelsea and Manchester United, Real Madrid, Paris Saint-Germain and Bayern Munich. 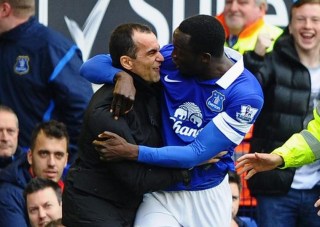 While it might seem illogical that Lukaku would re-join the Blues next season, the possibility looms large with a new guard being organized at Stamford Bridge. Previous managers Andre Villas-Boas and Jose Mourinho rarely used the Belgian in his time with the team, which ultimately forced him to move to Everton.

Despite the notion that Lukaku wouldn’t be willing to reunite with Mourinho, who is expected to formally take charge of United over the summer, the goalscorer has said otherwise. With the Red Devils requiring aid up front after only scoring 39 goals in 31 Premier League matches this season, Lukaku could be a tempting option.

That being said, Lukaku’s main priority — which he has made crystal clear — is to play Champions League football in the near future. That’s something that Everton, Chelsea and potentially United can’t offer him.

With those interest English sides being ruled out because of their Champions League restriction, a move away from the country could be in the offing for Lukaku. Madrid and PSG could very well become destinations for the striker, particularly if both sides bail out of the UCL quarterfinals in the coming weeks. Speculation has surrounded PSG striker Zlatan Ibrahimovic and his future with the team, and having someone as young and bright as Lukaku next season could soften the loss of the Swede.

Lukaku has only known English football for the last five seasons, so the potential of starting anew in another country could be appealing. He’ll undoubtedly become one of the hottest transfer targets on the market this offseason should Everton consider any offers.