This may sound wild to some, but there is one player more critical to Leicester City’s run for the Premier League title than any other of the Foxes’ terrific components.

Those people, as well-intentioned they may be, would be wrong.

N'Golo Kante has been simply sensational in the heart of Leicester’s midfield, and if you don’t buy his value by the end of this post than you will when you see the price tag slapped on the 25-year-old Frenchman this summer. It’ll be higher than Mahrez and Vardy, perhaps even if the two fees were combined. Money isn’t what makes him more valuable, though.

Arriving from Caen this summer, Kante has been relentless for the Foxes. He’s played in 32 Premier League matches, scoring a goal and adding three assists.

And in the sticky stuff, where it matters more for a title contender, Kante has been second-to-none in the Premier League this season. While Leicester’s style does lend itself to more chances for tackles and interceptions, there’s no debating the following stats (Credit: Opta Sports).

Yet his value hardly be qualified by traditional statistics. While Vardy was heralded for his two-goal performance against Sunderland, Kante’s two-way game was absurdly good.

Kante, frankly, is a boss. He’s missed just one match this season — the 2-2 draw at West Brom — and that is the only time Leicester has allowed a goal since Feb. 27.

[ MORE: All the weekend’s results in the Premier League ]

Amazingly, Kante does it all without crossing the line. A player of his tenacity and aggression would surely be handed many yellows, no? He has three, with just one since Dec. 14.

He’s lined up as more than a destroyer, too, playing on the left at times.

Here’s his first start of the season, Aug. 29 against Bournemouth (All graphics grabbed from Transfermarkt): 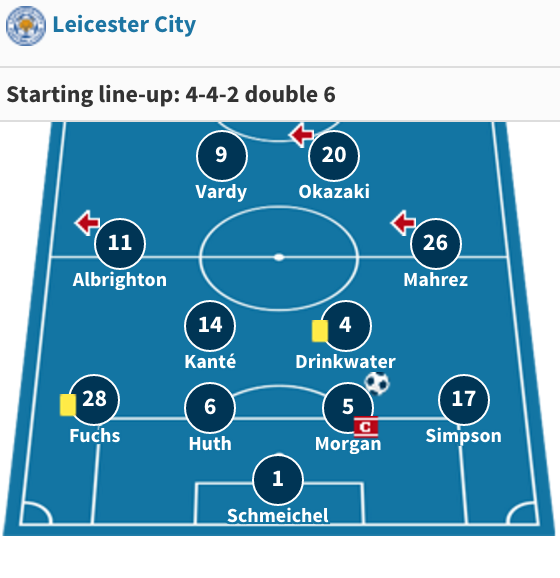 Then his second, Sept. 19 at Stoke City: 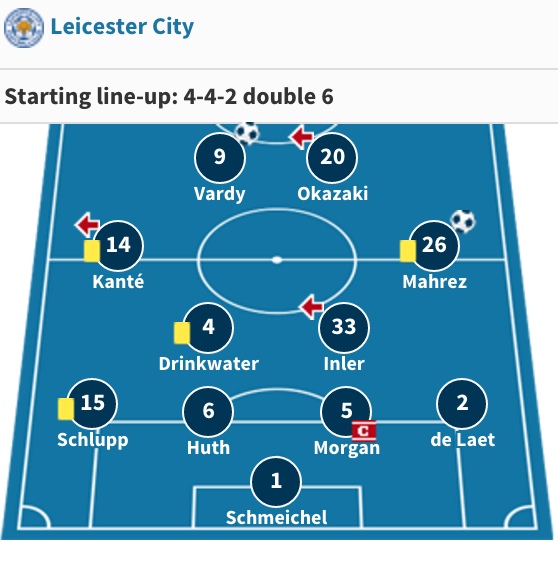 But mainly, it’s been here:

This isn’t to say that names like Vardy, Mahrez and Drinkwater haven’t been monumentally important to this run, as Claudio Ranieri has been almost as faithful to his XI as Sean Dyche was to Burnley last season.

But this loyalty is doing more than keeping Leicester in a fight for safety, it’s qualified the Foxes for Europe. And Kante is, in my opinion, their most valuable performer.

I’d imagine the wallets of Bayern Munich, Manchester City, PSG and Barcelona will try to acquire that value this summer. But for now, let’s revel in a player who plays with everything England wants from its midfielders. He’s just not English.