LONDON — Radamel Falcao is interested in playing in Major League Soccer in the future.

The 30-year-old has endured two injury-hit campaigns in the Premier League on loan at Manchester United and Chelsea from AS Monaco but prior to that was prolific scorer for Porto and Atletico Madrid, scoring 142 goals in 178 overall appearances.

Speaking to ProSoccerTalk at a PUMA event in Central London, Falcao admitted that he watches the North American league closely and sees a bright future for it.

“I follow the league. In England they are showing the games and I have some friends who play in there who I played with in River Plate or Porto like [Federico] Higuain or [Diego] Valeri,” Falcao said. “Some other Colombian players are playing in Major League Soccer and obviously the big stars like Andrea Pirlo, Kaka or Giovani dos Santos. I think MLS could be bigger than now because they have everything they need to become an even stronger league and become even more competitive.”

Multiple reports have suggested “El Tigre” could be moving to the Columbus Crew and he spoke of his admiration for how his friend Higuain is playing in Ohio.

“I haven’t talked with him [Higuain] for a few years but I follow him, we played at River Plate when we were young. I think his performances in MLS are fantastic,” Falcao said. “Players like him or Giovani, younger players are allowing the league to be bigger than it has been.”

Falcao can see the level in MLS rising, but he did acknowledge that he is still focused on staying in Europe for now.

“I never say no but in this moment I am thinking about Europe and my performances here,” Falcao said. “I think I have more years to fight in these leagues.”

The Colombian national team captain is eager to explore his options once this season is over but it appears that he will move on from current club Chelsea at the conclusion of the 2015-16 campaign. With a big summer on the horizon for Los Cafeteros in both the 2016 Copa America Centenario and at the 2016 Summer Olympics in Rio, Falcao will be in the shop window. 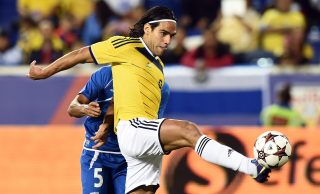 Speaking about the past two injury-hit seasons which has seen him make 41 appearances for Chelsea and Man United and scoring just five times, Falcao admitted it’s been a struggle.

“The experience has been a little bit tough. It has not been easy because I couldn’t play constantly like I wanted to,” Falcao said. “I will still fight for an opportunity to play and I am waiting for that. These last couple of years have allowed me to be better in another ways. I am happy for that.”

Considering his previous success in Europe, the predatory forward won’t likely be short of suitors this summer even after this struggles in England.

Contracted to Monaco until 2018, where will Falcao be next season?

“I don’t know. I am not thinking about next season,” Falcao said. “We the season is finished I start to think about that but I don’t know, we have four more games left. I would like to play more minutes.”

Most teams in MLS would certainly give Falcao the opportunity to get those minutes under his belt.