“Better” in sports is an unbelievably misleading word. The LA Galaxy aren’t “better” without 2013 MLS MVP and scorer of 75 goals (to go along with 43 assists) in 111 career MLS games. Of course they’re not. (Same goes for Nigel de Jong as well, probably.)

But there’s no denying that over the last four games — and the last two in particular — in which Keane hasn’t played a single minute due to knee surgery, have seen Bruce Arena’s side strike a much healthier balance between their attack and their defense, resulting in two of the best overall performances we’ve seen in MLS 2016 thus far.

[ MORE: Check out previous editions in the MLS Rewind archive ]

Three tactical adjustments have been made in Keane’s absence. In no particular order, they are: 1) Giovani dos Santos has taken up Keane’s free-roaming, play-making role which suits him much more than being shunted out wide as a winger; 2) Mike Magee’s place in the starting lineup offers the kind of defensive cover that Dos Santos isn’t capable of providing, whether on the left or right; 3) Gyasi Zardes’s deployment through the center has shown that he’s more productive as a striker than as a winger. As a result, the Galaxy are humming right along with near-perfect, best evidenced in Saturday’s 5-2 dismantling of previously-unbeaten Real Salt Lake.

On point no. 2, below is the combined passing-and-defensive-actions diagrams for Juan Manuel “El Burrito” Martinez and Demar Phillips (left), and that of left back Chris Wingert (right), who combined to play all 90 minutes up and down RSL’s left wing, where Magee was ever-present in assisting right back A.J. DeLaGarza. You’ll notice that they 1) are all three pushed extremely wide, and 2) combine to complete all of one pass into the Galaxy’s penalty area. The left wing is a total non-starter for RSL in this one, though the absence of Joao Plata and his ability to operate in the space between the full back and center back on either side was undoubtedly a big miss. 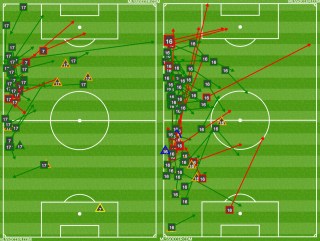 Keane’s return from injury is approaching (he was originally pegged with an early-to-mid-May return date), at which point the Galaxy will undoubtedly be a more talented side on paper, but not necessarily one that fits together and functions at its very best.

Someone from the above list of attackers is headed to the bench upon Keane’s return — not even Arena could get away with sitting a player with more goals and assists combined than games played in his MLS career. It’s easiest to say, “well, Magee is the ‘worst’ player of the bunch, so it should obviously be him,” but it should be one of Zardes or Dos Santos instead.

Let’s talk about MLS’s gigantic, growing refereeing problem, because that seems to be what MLS and the Professional Referee Organization want us to do at the end of every MLS weekend.

MLS’s mandate for its referees to officiate games in a stricter manner in an attempt to rid the game of dangerous challenges, thus seeing the number of red cards handed out increase a fair bit over the first month of the season, has been met with plenty of opposition and disdain thus far in 2016. In defense of the league and PRO, though, whether you believe it to be a necessary venture, at least it indicates the two organizations, which work together hand in hand, have considered a course of action to improve the league’s standard of play and protect its players.

Being proactive is typically a good thing, and this instance is no different. What’s not so great, however, were a pair of blown calls on Sunday that saw the league’s two nationally televised games decided (to varying degrees) by something out of the hands of the 22 players on the field.

Referee Jair Marrufo failed to simultaneously award Sporting Kansas City a penalty and show San Jose Earthquakes defender Andres Imperiale a red card when he quite clearly slid through the legs of Dom Dwyer, coming nowhere near the ball in his last-ditch challenge (WATCH HERE). Less than five minutes later, Marrufo (correctly) awarded the Earthquakes a penalty when Tim Melia brought Simon Dawkins down with with contact that was no greater and no less than occurred on the other end of the field. Chris Wondolowski converted the spot kick, and the ‘Quakes won the game 1-0.

Not even four hours later, Hilario Grajeda failed to show Karl Ouimette a red card of his own after the New York Red Bulls defender swiped the legs of Orlando City SC striker Cyle Larin right out from under him with the two racing into the Red Bulls’ penalty area, and an obvious goal-scoring opportunity upon them (WATCH HERE). Orlando City held a 1-0 lead at the time and would have enjoyed a man advantage for the game’s final 27 minutes. Instead, Ouimette stayed on the field (he later scored an inconsequential own goal), the Red Bulls equalized two minutes later, scored again four minutes after that, and went on to win the game 3-2.

After each game’s final whistle, neither referee had any desire to explain their calls — or, non-calls, as it were — that drastically changed the course of two otherwise enjoyable games of soccer (UPDATE).

Went to officials room to get a response from Hilario Grajeda on the no-red decision, but he declined to comment. #MLS

No accountability for their shortcomings, which is perhaps MLS’s greatest shortcoming with regard to its referees: Marrufo and Grajeda, along with every other ref who erred in costly fashion this weekend and last weekend and the weekend before that and so on, will be right back out there (mis-)managing MLS game next weekend and the weekend after that and so on. PRO general manager Peter Walton will do a controlled interview with some online or television outlet in the coming days or weeks, insist the organization is committed to raising its standard, and we’ll all go back to living our everyday lives.

Expect to see the exact same mistakes in the coming weeks and months, though, and to find yourself wondering yet again, “why did I commit that much of my afternoon/evening/weekend to watching MLS when the guys with the whistles are always the stars of the show?” For a league that’s incredibly brand- and market-conscious, you’d think MLS would move quickly to fix something that’s bound to cost it viewers — and ultimately dollars — if unchanged.

If it’s a solution to the problem that you’re looking for, Orlando City head coach Adrian Heath offered up a pretty good one last week: instead of signing aging foreign players at the end of their playing careers, commit some of that money to recruiting quality refs who have called games at the highest level in order to increase the standard of refereeing, because the quality of play has improved leaps and bounds while the men in the middle of the field seem to have stagnated and/or regressed badly.

No single player in MLS can take over a game the way that Sebastian Giovinco can do, and so regularly does. With his 22-goal, 16-assist 2015 season still fresh in everyone’s memory, Giovinco is the focal point of every opposition’s defensive gameplan (this was the case last year as well, to little avail), which limits the number of touches, space and chances that come the Atomic Ant’s way during a given game.

So what, the 29-year-old Italian said this week, as he carved up the Montreal Impact for two goals, three massive road points and a bit of revenge for last season’s playoff elimination and embarrassment. A sign of a truly great player is the ability to do a lot with very little, and Giovinco continues to do that week in and week out. His 81st-minute insurance goal was as ruthless as it was comforting for TFC fans.