MANCHESTER — When Sheikh Mansour bought Manchester City in 2008, these are the kind of nights he dreamed of bringing to the Etihad Stadium

Man City drew 0-0 with 10-time European champions Real Madrid on Tuesday in the first leg of their UEFA Champions League semifinal. City have never reached Europe’s final four before and it was a banner night for the club as the eyes of the world watched on. Okay, they haven’t won the Champions League, yet, but they are at least in the final four. That is a sign of huge progress being made.

Many millions have been spent in making the City Football Group, and its heartbeat and hub in Manchester, a glowing beacon of global success. However one thing, a very important thing, has eluded it: success in Europe.

Yes, City have won the Premier League title twice in the last four years, plus two League Cups and an FA Cup trophy, but the real yardstick they’re measured by is success in Europe. How do they stack up against Europe’s elite? How many Champions League trophies do they have?

They’ve taken a while to adapt to Europe but they are hellbent on becoming established among the big boys with players like Sergio Aguero, Vincent Kompany and Kevin De Bruyne leading the charge. With Joe Hart pulling off two sensational stops late on, they matched Real Madrid and were the better team in the first half with Fernando and Fernandinho pressing high and winning the ball back at will. A draw was a fair result and the second leg is set up for a huge showdown. Real legend Zinedine Zidane rates his teams chances of advancing to the final at 50-50.

On the day of the game, there was a real sense of optimism in the air around Manchester. On the train heading in a few hours before the game, groups of City supporters boarded and immediately began dissecting the key issues. First up: how do we stop Cristiano Ronaldo?

“I remember being in the Bernabeu a few years ago and every time Ronaldo got the ball we s*** ourselves. We were leading late on. Then he started playing and we lost 3-2.”

Well, the good news was that Ronaldo missed the game through injury and if he’s fit for the second leg next Wednesday in Madrid, City’s fans will again be fearful. Rightly so.

Back to the City fans on the train before the game, inevitably City’s crosstown rivals are never far from their thoughts. With Louis Van Gaal’s side struggling to secure a top four finish this season, City’s fans mumbled to themselves how they’d hate to see them win the FA Cup final against Crystal Palace at Wembley next month. Going through and predicting their top four teams in the PL next season, they left United out. 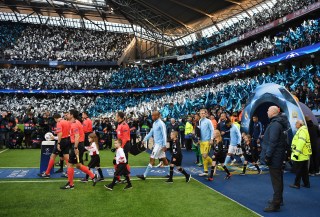 Another compared Aguero to Luis Suarez — the latter has been linked with a move to City and could be Pep Guardiola’s marquee signing when he arrives this summer — and believed that they were of the same ilk.

“There’s a reason Suarez is at Barcelona and Aguero is at City, I hate to say it, but I’m right,” quipped his buddy as he flicked open another beer with a Guinness key-chain bottle opener.

That level of self deprecation is synonymous with City. They’ve been through the wringer over the years but failing to the third-tier of English soccer and living in the shadow of neighbors Manchester United for decades makes them appreciate nights like these even more.

Walking around the Etihad and Manchester before kick off with Real Madrid fans doing shots on the local trams and seeing signs such as “Living the Dream” held up, it is clear this was a moment to savor. Things are very good for the life of a City fan these days. People like William and Paul Henry — standing in a courtyard outside the stadium before the game eating fish and chips, taking it all in — believe this a breakthrough moment as they traveled over 250 miles from the south of England to make sure they didn’t miss it.

“First time ever in the semifinal, we don’t come too often because of the distance but we had to be here. Whatever happens,” Henry said.

Do they expect to win the Champions League?

“Nooo,” William Henry laughed. “We expect nothing… but the only way is up from there. This is a breakthrough, even though we want go any further, I think this is the breakthrough, With a new manager, some fresh faces in the summer, we will go on from here.”

The general consensus among City’s fans is that they aren’t quite among Europe’s elite, even though they are one win away from reaching the UCL final, but they have taken that next step. If they aren’t quite at Europe’s top table then perhaps they’re now on the sidetable, the one reserved for the smaller children at large family gatherings. If Sheikh Mansour continues to pump money in, and he will, it won’t be long until they make the step up permanently.

“It feels like the end of the first part of the journey,” Paul Henry added. “I know that doesn’t make too much sense but with this group of players, they have got to this point, ideally they go further and win it but like we said, we aren’t too confident. For the club it has been a nice journey to get to this level. It almost feels like the end of that first part of the journey.”

With Guardiola arriving this summer, City’s fans aren’t expecting the Spanish coach to wave a magic wand to solve all of their problems but they know City aren’t far off the Barcelona’s, Real Madrid’s and Bayern Munich’s of this world. They competed in the UCL for the first-time in 2011 and in five years they’ve come a long way.

Still, chatting with Real Madrid’s fans outside the stadium before kick, it is clear they don’t see City as a threat. At least right now. Speaking to Alberto Gomez, a Madrid native who had traveled to Manchester for the game, he believed City still have a long way to go to be talked about among Europe’s elite.

“I think if they invest more money, maybe, but they will never have the history because the history is not inside them,” Gomez explained, smiling as he held a cheese and chorizo sandwich in one hand. “In many years it could be possible, but I don’t know. Their story has just begun.”

City’s fans took exception to the view that they don’t have the history to dine at Europe’s top table. Sure, they’ve never been at this stage before but this is just the start for them.

Son and father William and Paul McCormick have seen the good and the bay days. Walking to the game together on Tuesday, I stopped them as they looked up at the billboards on the side of the Etihad and nodded their head in respect about seeing City’s U-14s and U-17s winning titles.

What do they think about the likes of Real questioning City’s non-existent history at Europe’s elite level?

“They’ve been throwing money around for donkeys years. Who are they to go around saying you can’t throw money around?” Paul McCormick said. “I remember being at school and they signed Luis Figo for 40 million and I think we signed Lee Bradbury for 3.5 million!”

“About history,” William McCormick said, jumping in, “every club has history. Just because you have not won trophies doesn’t mean you haven’t got history. We have got a fair amount of history at this club as well. These are early days. Who knows what lies ahead?” 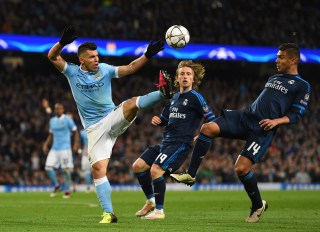 That optimism epitomized how City’s fans are feeling. Sure, they aren’t going to win the Premier League this season but they’ve been there, done that. They now want to be champions of Europe and win the final trophy the club has yet to get its hands on.

A team that knows what being champions of Europe is about is Real Madrid. Real achieved La Decima in 2014 and under Zidane’s guidance there’s a belief they can clinch their 11th European Cup this season and continue their dominance of European soccer.

For those of you who haven’t visited it, Manchester is a city which loves the game. Pure and simple. In my hotel lobby two receptionists, one from Italy and one from Spain, spoke about their love for AS Roma and Barcelona. With City and United and handfuls of professional teams in its suburbs, its a soccer hotbed. There is a passion for the game which is unrivaled in many cities across the world and on nights like these you see a city which was the heart of England’s industrial revolution come to life.

Yes, much of Manchester’s economic prowess may have been left behind when the cotton mills and factories began to disappear, but one area it has always thrived in is attracting the interest of soccer fans from across the globe.

That sense of being Mancunian and being from the city is something that resonates perhaps a little stronger with fans of Man City than it does with those of Man United. For decades United has been a global team. Think Dallas Cowboys. They’ve lost a little bit of their local identity with the success, vast overseas exposure and cashing in on commercial deals.

It’s true that City is pushing ahead with that model — especially given recent investment from China — for global dominance and even though they are still behind United, they are among the fastest growing brands and businesses in the soccer world. 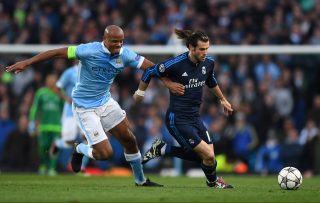 Back to the fans on their way to the Etihad.

One was quite insistent that Guardiola would play some of the kids from the academy and bring through some talented youngsters in the coming years. That reminded me of a chat I had with Kompany, City’s captain and talisman, earlier this season.

“It is one of the most important things for Man City in the future. One of the biggest challenges is that we have all these great players from great places but there’s something fundamentally different to Manchester as to other cities,” Kompany said, smiling.

“I think for Man City to become one of the biggest clubs in the world it will have to go back to being more Mancunian than ever and to expose that as a brand and a way of being. I think that is a big challenge for City in the future. You know, I’ve bought into it a lot and a lot of players have bought into it. There is just something special about that industrial past of Manchester that somehow needs to filter through the youth teams and filter through the first team. This factor is something that people will support Manchester City for.”

On nights like these, City will have found new fans and new admirers across the global that can relate to the team in Sky Blue and can see the energy, passion and excitement on the faces of the supporters at the Etihad Stadium.

The Blue Moon is not only rising. It’s now hanging high over the soccer world where the owners always hoped, and planned, it would be.

“If you would’ve said back in 1999 when we had a playoff final against Gillingham (in League One, the third-tier) that you would be playing in a semifinal of the Champions League against Real Madrid… you would never had dreamed about it,” Paul McCormick said, shaking his head as he took in the sights around him.

“You have to pinch yourself for days like this,” chipped in William McCormick. “It is just unbelievable how far they have come. This is just the start. We have got the money there, we have a fantastic training facility across the road with the kids coming through. Who knows where it could lead to?”