Silly season is heating up.

With the transfer window reopening on July 1, there’s still over two months until players can officially move on in the Premier League.

However, with a busy summer of international tournaments coming up — the Copa America Centenario and EURO 2016 will take center stage — there is already plenty of whispers about player movement emanating from the gossip columns.

Here’s a look at a few of the latest rumors…

Despite being on the brink of winning the Premier League title with Leicester City, there are multiple reports that N'Golo Kante will move on this summer. The diminutive yet brilliantly destructive central midfielder joined Leicester from Caen last summer for $7.5 million but the the Sun newspaper claims he could be heading to Arsenal this summer, while the Daily Mirror says Manchester City have joined the chase.

The 25-year-old midfielder was on the shortlist for PFA Player of the Year and has been the heartbeat of Leicester’s success. He leads the PL in tackles and interceptions and in his first season in England he’s taken the league by storm. With Arsenal’s growing need for a top-class holding midfielder, it seems like Francis Coquelin has turned into a stopgap solution with numerous reports also linking Arsenal with a move for Borussia Monchengladbach’s Granit Xhaka this summer. Arsene Wenger has previously admitted he’s known about Kante since he was 10-years-old (add him to Wenger’s growing list of “we looked at the player” players) from one of his close friends in France.

The Sun also claims to Arsenal is keen on another Leicester star, recently named PFA Player of the Year Riyad Mahrez. It would cost Arsenal a cool $37.5 million to pick up Mahrez, though, and if the Foxes did want to cash in then that would be a considerable profit on the $800,000 they paid Le Havre for him two years ago.

Back to Kante, and the Mirror claims that Leicester have already told the French international midfielder he can leave this summer… as and when they line up a suitable replacement. His manager Claudio Ranieri has already said as much regarding Kante and mentioned he wouldn’t stand in anybody’s way if they wanted to leave. The Mirror believes incoming Man City manager Pep Guardiola is a big fan of Kante, but is there room for both him and Ilkay Gundogan in a new-look City midfield? It is reported that the Borussia Dortmund midfielder has agreed a deal in principle to sign for City this summer. That said, if he does end up leaving Leicester this summer then Kante will have plenty of options as Juventus, Chelsea, Tottenham and Paris Saint-Germain are also said to be willing to sign him.

Unless for a huge pay day, why would Kante not want to stay at Leicester for another season and play in the Champions League for the Foxes? 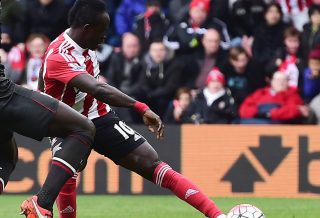 Two others players who could be on the move this summer are Manchester United’s Memphis and Southampton’s Sadio Mane. In fact, the duo could be involved in a swap deal according to multiple outlets.

Memphis, 22, has failed to life up to the hype in his debut season in England and has scored just twice in the PL for United under fellow Dutchman Louis Van Gaal. The pacey winger started the season brightly but has faded dramatically and lost his place in the team midway through the campaign. He signed from PSV Eindhoven for $37 million last summer but the Daily Start reports that United are desperate to get rid of Memphis and combined with their admiration for Mane, it could work out.

Now, United had bids turned down by Southampton for Mane last summer and they’re adamant their Senegalese international forward is worth in-excess of $45 million. However with Mane being a little up and down this season plus Saints boss Ronald Koeman previously admitting he tried to sign Memphis before United did, perhaps this deal would suit everybody concerned. Mane, on his day, can rip teams apart either out wide or centrally with his searing pace making him unplayable. He has scored four goals in his last five games for Saints and 11 in 40 appearances this season.

In all honesty, Memphis needs a fresh start and Southampton could provide that. That said, Koeman would be losing his main attacking threat and Saints should not let Mane go cheaply if they decide to to cash in. So, Memphis plus $25 million for Mane. What do you think of that deal?