It is a huge summer for the U.S. national team and Jurgen Klinsmann.

The host nation of the massive Copa America Centenario tournament, the USMNT will be expected to get out of a very tough group and make a splash among CONCACAF and CONMEBOL’s elite.

That’s not easy. Klinsmann will name his preliminary roster for the 2016 Copa America this Friday.

With that in mind, though, there’s exactly five weeks to go until the U.S. plays Colombia in Santa Clara in their Group A opener which also opens the tournament.

How will the USMNT line up?

Below is my best starting XI. Let me know yours in the comments section below.

In goal, it’s a pretty straightforward battle between Tim Howard and Brad Guzan. Sure, Howard hasn’t been playing regularly for Everton but he should start ahead of Guzan with the U.S. certain to be under plenty of pressure from Colombia, Costa Rica and Paraguay in Group A.

In defense, now that Klinsmann seems to want to play people in their strongest positions then it should be DeAndre Yedlin at right back, Geoff Cameron at center back and Steve Birnbaum alongside Cameron. Yes, the D.C. United defender is a relative rookie at national team level but he and Cameron struck up a good partnership in central defense against Guatemala and at this point I think you have to play whoever Cameron is most comfortable with in that partnership. John Brooks, Matt Miazga and Matt Besler will likely be around too. The problem area seems to be left back. 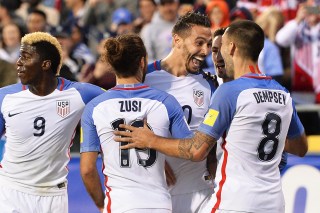 I’ve chucked Fabian Johnson in at left back because the U.S. now has a wealth of options in midfield ahead of him. Tim Ream or Edgar Castillo are better defensively but Johnson adds more going forward and I think the U.S. is stronger with him at left back. Also, Brek Shea should get in the squad as he’s impressed since returning for Orlando City. He can operate down the left flank or in any of the attacking positions. It pays to be versatile in the U.S. setup.

In midfield, Jermaine Jones has been flying since he joined Colorado Rapids and although long-term he won’t be around, for this summer he will be in the Copa America squad. He is one of Klinsmann’s mainstays and during the 2014 World Cup he showed he can do it on the big stage when it really matters. Alongside Jones will be Bradley in a defensive two, while the three above them are Alejandro Bedoya, Clint Dempsey and the wildcard, Christian Pulisic.

In a 4-2-3-1 formation, Bradley and Jones will sit to cover the spaces when the three ahead of the bomb forward in support of the lone front man, Jozy Altidore. With Yedlin and Johnson both eager to get forward, they’ll have to be a little more disciplined and choose when they foray into the opponents half. That said, both Pulisic and Bedoya know their defensive duties and will help out. As for Pulisic, he is 17 and on top of the world after becoming a regular for Borussia Dortmund and making his U.S. debut in the past few months. Let him express himself this summer and see what he’s made of. 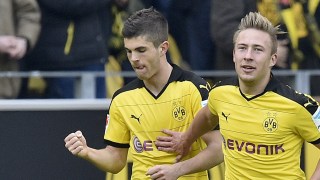 Up top I’ve gone with Jozy Altidore but Bobby Wood can count himself unlucky and even Gyasi Zardes who I still believe is much better through the middle than out wide. It is a big summer for Altidore to prove he can still lead the line for the USMNT. I believe Klinsmann’s best XI is among the best the U.S. has ever had. It is right up there, quality wise with players playing in the Bundesliga, Premier League and Ligue 1 week in, week out plus MLS stars. However, it’s all about getting that balance right and sticking with the same team to build continuity. Can they do that this summer and make a deep run in the Copa America Centenario?

What do you guys think of the formation and players selected above?