Leicester City were crowned the 2015-16 Premier League champions on Monday after a magical season which defied belief.

Claudio Ranieri‘s Foxes won the club’s first-ever top-flight title in their 132-year history after starting the season as 5000-1 outsiders and among the favorites for relegation.

Now, they’re champions of England and will be playing in the UEFA Champions League next season. It has been an unforgettable season, one of the greatest in sporting history and it is a story that has encapsulated the soccer, and sporting, world.

Here’s a look back at every game this season to remind us of just how magical this journey was. 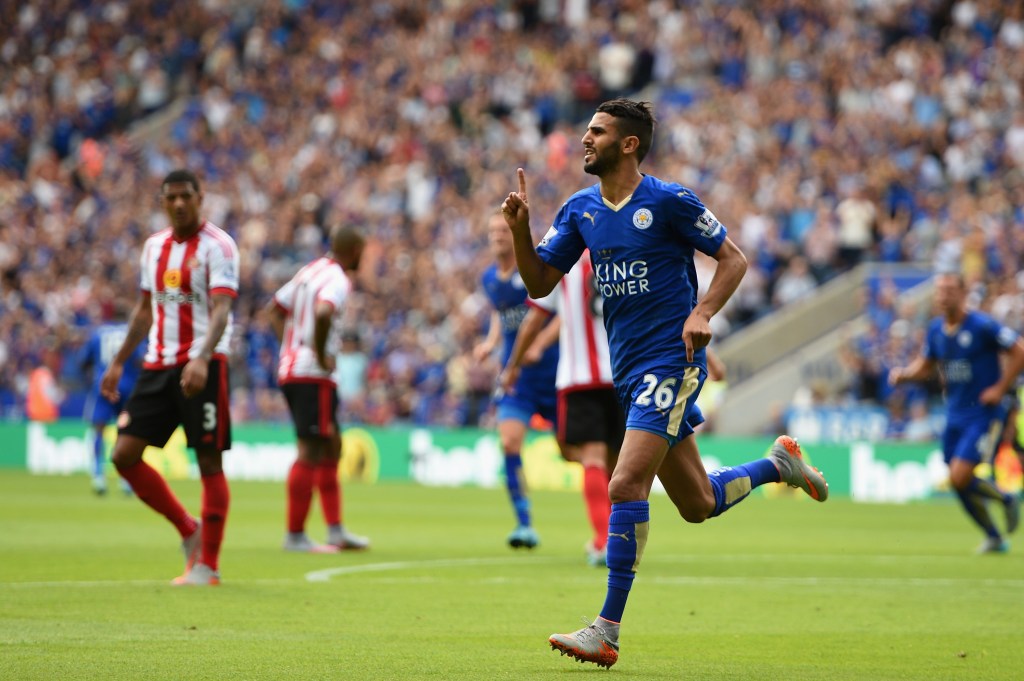 How did we not see this coming? Leicester had an undefeated preseason with wins over mighty Lincoln City, Mansfield Town, Burton Albion, Rotherham United and Birmingham City before turning its attention to Sunderland.

Mahrez stayed hot, and Mainz transplant Shinji Okazaki scored his first Premier League goal as Leicester took a 2-0 lead by halftime. This victory looks even better in retrospect, as Slaven Bilic‘s Hammers went to the next level.

Again, the headliner here is Mahrez. Spurs went up 1-0 with 10 minutes to play thanks to a debut PL goal from some guy named Dele Alli, but Leicester’s Algerian wizard quickly equalized with a gorgeous move from the right to score his fourth goal in three matches.

Leicester again trailed late thanks to a Callum Wilson bicycle kick goal, but Jamie Vardy threw himself a penalty kick party. The 29-year-old dribbled into the box only to get knifed down, and the 86th minute saw him scoring the penalty off a diving Artur Boruc to give the visitors a point. 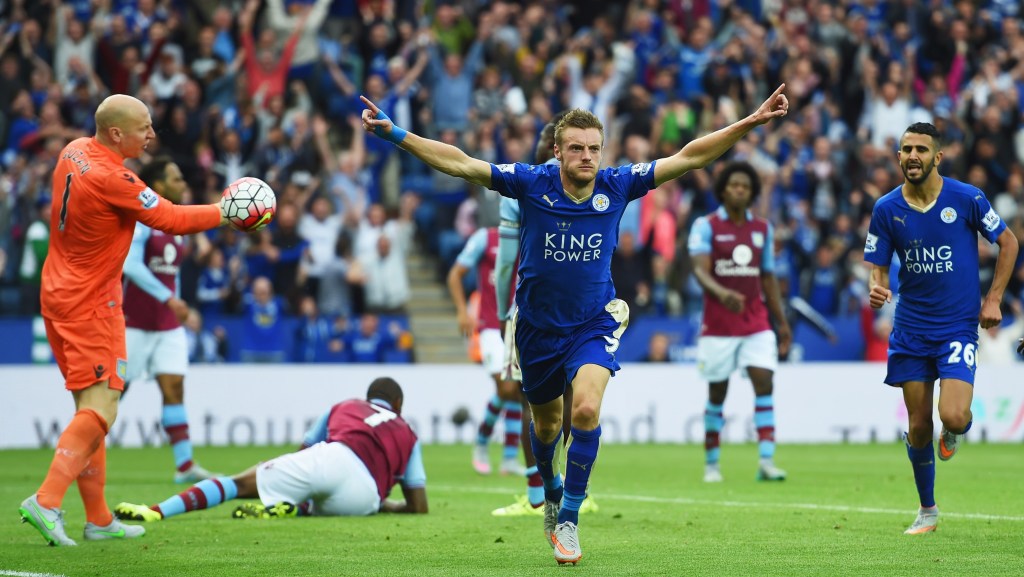 Those impressive moments aside, this is where the magic starts to feel incredibly real. At the time, we didn’t realize Tim Sherwood hadn’t fixed much of anything from the year before, and that Villa was in big trouble.

Villa scored on both sides of halftime, and led the derby 2-0 with about a half hour to play. Ritchie De Laet made it 2-0 thanks to goal line technology, and Vardy tied it up within 8 minutes. Substitute Nathan Dyer scored in the 89th minute to win it, and fans on both sides had very different intonations of “Wow”.

These guys! Vardy and Mahrez scored again, and there was no change in the dramatics from the previous week. Stoke had opened up a 2-0 lead before the twin terrors tabbed late goals, Mahrez by penalty, as the Foxes claimed a point and kept the Potters scrambling near the bottom of the table.

Vardy’s early goal gave Leicester’s home faithful hope that this remarkable run could be on a championship path, but Arsene Wenger‘s Gunners weren’t interested in that sort of story. Alexis Sanchez had a hat trick to join scorers Theo Walcott and Olivier Giroud on the sheet. Vardy had another in the blowout, as Foxes don’t quit.

Vardy won and converted another crafty penalty to keep his goal-scoring streak alive, and Jeff Schlupp also scored in lifting Leicester to its first win in three matches. 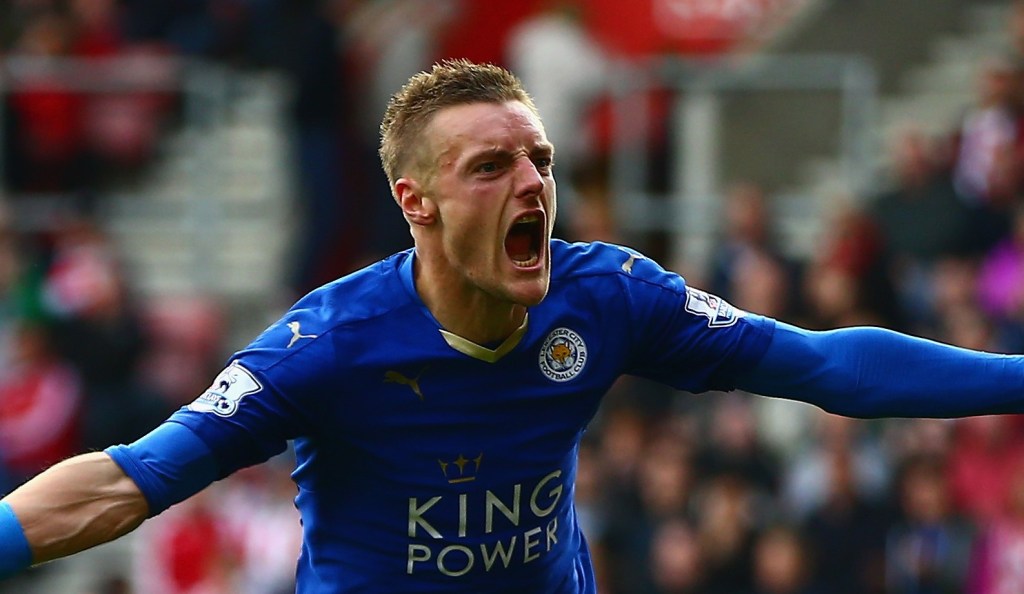 Yet another Vardy-inspired comeback from another 2-0 hole, as the PL’s leading scorer made it nine on the season in canceling out an equally-remarkable pair of unlikely goal scorers on the home end: defenders Jose Fonte and Virgil Van Dijk. The Foxes had 16 points and remained in the Top Five at the close of business, three more than a Saints club they’d need to hold off if European competition was to be (Hint: They did),

At the time, it looked like Leicester and Palace would be duking it out for a top half spot, and most would’ve still thought Palace was a more legit option. But… Vardy, again. Palace had a late giveaway that the striker used to beat Julian Speroni and move four points clear of the visitors.

Salomon Rondon opened the scoring for Tony Pulis‘ Baggies, and surely it’d be hard to break down a lead-holding WBA. Marc Albrighton’s magical crosses continued to find the mark, and Mahrez tied the match at 1 before using a back post volley to make it 2-1. Danny Drinkwater then played in Vardy for an insurance tally that made the English striker the third player in PL history to score in 8-straight games, joining Ruud van Nistelrooy and Daniel Sturridge. Impressive company, no?

Kasper Schmeichel‘s big saves prepared another feast for Leicester, and Vardy devoured history on the way. N'Golo Kante gave the Foxes the lead when Heurelho Gomes bungled a fairly routine save, and the keeper later took down Vardy for yet another PK. Nine-straight.

“Leicester City is for real, and so is Jamie Vardy‘s place in history.”

So began our recap of the Foxes’ thumping of the Magpies at St. James Park, as Vardy worked a 1-2 with Leonardo Ulloa to join Ruud van Nistelrooy as the only players in Premier League history to score goals in 10-straight matches. Ulloa later added one of his own, joining Okazaki on the list of scorers in the clean sheet victory. 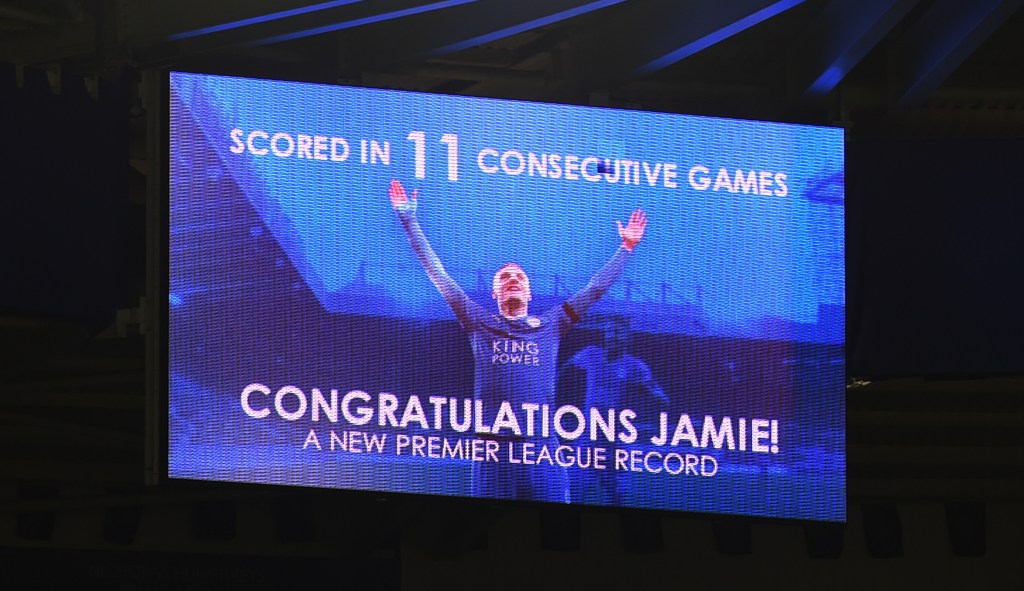 The first of Leicester’s 1-1 draws with the Red Devils was the day Vardy became immortal (so to speak, as an actual immortal Vardy is pretty terrifying). How fitting that Vardy became the first PL player to score in 11-straight games against RVN’s team, and that he slotted past impressive backstop David De Gea to do it. Bastian Schweinsteiger provided the equalizer, and Leicester was level on points with first place Man City.

As we’d later learn from a 4-0 decision at King Power, Leicester was a major matchup problem for the Premier League’s Welsh mainstays. Mahrez was greedy, scoring all of Leicester’s goals as Vardy’s streak ran its course in Wales.

If you’re like me, you thought the Foxes were entering a four-match run that would halt their title momentum for good. So, if you’re like me, you were really wrong. Mahrez found Vardy before scoring himself, and Chelsea could only manage a Loic Remy goal near the end in a notable win for Leicester. 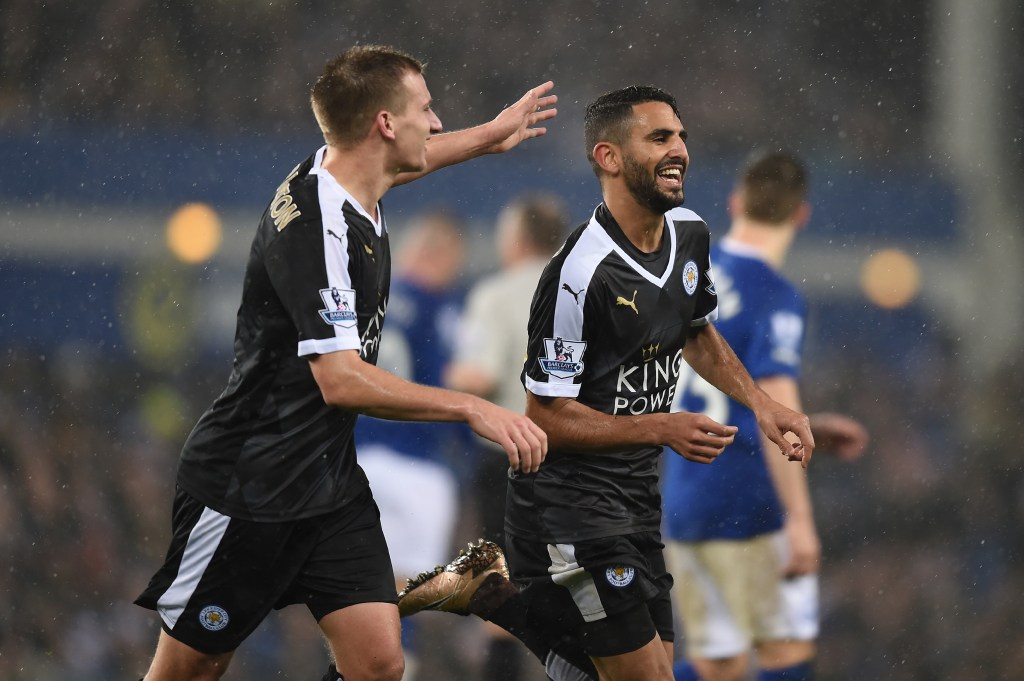 This was one of those days that symbolized the good fortune needed to win a title, as Mahrez converted penalty kicks in both halves. Shinji Okazaki added a third goal to make it 3-1, and Leicester held on for a win at Goodison Park.

DYK: The Foxes were capable of being blanked? Christian Benteke, of all people, gave the Reds a home win to put Leicester in the loss column for the second time this season.

Another day without a goal for Leicester wasn’t too worrying, as the Foxes held Man City off the scoresheet to stay ahead of the visitors on the Premier League table.

A game where the Cherries were reduced to 10-men but somehow Leicester couldn’t find a way through. This definitely felt like two points dropped for Ranieri’s side. 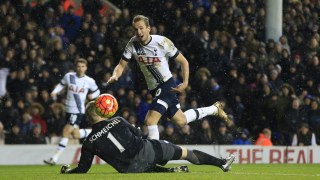 Spurs hit the crossbar, went close on several occasions but Leicester held on. Then, on a cold January night at the Lane, Robert Huth scored a late winner to send the away fans wild.

Another little blip for the Foxes against their Midlands rivals Villa. Okazaki gave Leicester the lead but Rudy Gestede‘s late equalizer got Villa a point. 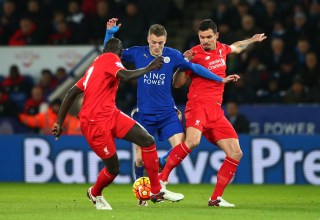 Vardy belted in a sensational volley to down a spirited Liverpool side who had looked the more likely to go ahead. The Foxes were now starting to truly believe.

If the Liverpool win gave them belief, victory at title rivals Man City almost handed Leicester the advantage in the title race. Mahrez dazzled City and Huth scored two crucial goals and the Foxes were now six points clear. “We’re going to win the league!” was sung by the Leicester fans, perhaps for the first time they truly believed it. 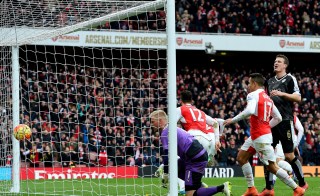 This was the game where everybody thought the wheels had come off. Vardy’s PK gave them an early lead but a goal from Walcott and then a last-gasp winner from Welbeck had everyone believing Arsenal would now take hold of the title and the Foxes would crumble…

Perhaps one of the most important 1-0 wins, Leicester left it incredibly late with Leonardo Ulloa scoring a stoppage-time winner. His goal actually caused mini-earthquakes at the KP Stadium, according to records of seismic activity.

The Baggies battled hard with Leicester and Craig Gardner‘s fabulous free kick grabbed the Baggies a point. Leicester’s lead was now down to just three points at the top.

This was the start of the Foxes incredible run of 1-0 wins. Mahrez, again, provided a magic moment with a fine, curling goal from the edge of the box. The Algerian wizard was the difference.

Okazaki’s fine overhead kick was the winner this time as Rafael Benitez tasted defeat on his managerial debut for Newcastle.

Mahrez, again, was the hero as Vardy crossed for him in the first half and he swept home. Palace hit the bar and had shots cleared off the line late on. Leicester fans sing “We’re going to win the league!” louder and longer than ever before. They were now eight points clear at the top.

I was at the KP and said it on the day: this felt like the day Leicester won the Premier League. Wes Morgan‘s powerful first half header won it for the Foxes, with penalty calls going their way in a tight game. Doughnuts and beer were handed out to all home fans to celebrate the chairman’s birthday in the sun. A real party atmosphere and the dream was inching closer.

Vardy scored twice in the second half and Jack Rodwell missed a glorious chance as the Foxes overcame the Black Cats. Ranieri was overcome with emotion at the final whistle as he began crying on the pitch. 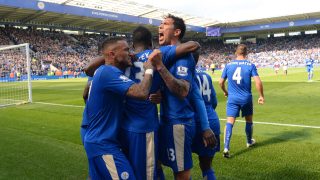 Controversy galore. Vardy put Leicester ahead early but was sent off in the second half for simulation. Pandemonium as he then launched an attack on the referee and received a further game ban. At the other end West Ham scored twice in three minutes to turn the game on its head, the first a penalty kick, as the Hammers look to have ruined the party. However, a very dubious late penalty kick was awarded by the under-fire referee, Jon Moss, and Ulloa slotted it home to send the KP wild. Leicester had dodged a massive bullet.

No Vardy, no problem. Ulloa scored twice as the stand in and he Foxes moved eight points clear. Spurs slipped up at home the following day against West Brom, so they were now within three points of the title. 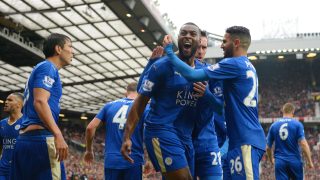 Morgan canceled out Martial’s early strike and despite penalty calls and United pushing late on, the Foxes held on. That meant anything other than a win for Tottenham against Chelsea on Monday meant they would win the title. Spurs were 2-0 up… then crumbled and Eden Hazard’s late equalizer sealed their first-ever title win in their 132-year history. Cue parties, euphoria and excitement on the streets of Leicester.

The title will be handed to the Foxes in front of their own fans on Saturday. The players were partying long into the night so don’t expect too many goals or fine performances this Saturday. Who cares though? A ticket to this game will be the hottest ticket in town and were being sold for more than $11,000 each three weeks ago.

On the final day Leicester will travel to the team they took the title from, Chelsea. The Blues drew with Spurs to clinch the crown for Leicester and former Chelsea boss Ranieri will return to his former club as a champion. You couldn’t have written the script better. Bellissimo.