LEICESTER — From the moment the sun came up until the moment it went down, May 7, 2016 will live in the memory of Leicester City fans forever.

Scratch that. It’s a day citizens of Leicester will never forget.

From flares being let off in the street in the morning, to dance parties and spraying champagne outside the King Power Stadium before the game, the entire Midlands city of just over 300,000 people came to a standstill to salute their champions.

Few shots from around Leicester ahead of the biggest party this city has ever seen. #LCFC #BPLonNBC pic.twitter.com/w7MbVDGyDp

On Saturday Leicester City’s captain Wes Morgan lifted the Premier League trophy into the air to mark the Foxes’ first top-flight title win in their 132-year history. They were supposed to get relegated this season but shocked everyone to win it all. This felt like a scene from a movie.

It felt like Leicester was at the center of the universe. It probably was. It was the greatest day in their history.

With the sun beating down on Leicester, the party was in full swing from way before midday. Banners of every player and the manager adorned lamp posts along the main city streets and messages from national bookmakers Ladbrokes proudly stated “Congratulations, Leicester City! We’ve paid out £3 million” in their shop window near Leicester market.

Of course, I’m sure you don’t need reminding, but Leicester were 5000-1 to win the PL title before this season began. They’ve lost just three games out of 37 so far this season and have become the first new champion of England since Nottingham Forest in 1978. They’ve come from nowhere to inspire the world that true underdog stories can still happen as they’ve defied the powerful and wealthy elite of the Premier League.

I spoke to one Leicester fan who was choking up as he sipped on a beer and took in the sights around him. He was in his 60s and even though he’d had five days for it to sink in, he couldn’t believe it.

A group of lads I sat with in a pub in the center of town just sat there with massive grins on their faces.

Every direction you looked in you saw signs marking Leicester’s title win, in shop windows, hanging from churches, at the train station, car windows had flags hanging out of them. Since they won the title on Monday night courtesy of Tottenham Hotspur drawing at Chelsea, the last five days has been one huge party.

Leicester fans told me that they took it easier after Tuesday and were saving themselves for Saturday. It certainly looked like that.

As I walked through the streets, Leicester City’s flag was flying on the famous cathedral, fans were hanging out in pubs and a mob of Italian supporters who had flown over from Italy to salute Ranieri were rampaging around town.

Speaking to some of Ranieri’s Italian fans, they told me they flew in this morning from all over Italy to witness this moment. They wanted to salute what their countryman had achieved.

Walking the streets from the central area just over a mile to the King Power Stadium, cars along the way honked their horns and families walked to the stadium together with huge smiles on their faces. The local pubs were packed to the rafters with Kasabian, the city’s favorite rock band, blaring out of the speakers. Everyone said similar things: “I can’t believe this is happening!” and “Is this real?”

Leicester must have been the happiest city on the planet on Saturday. I’m sure of it.

The party has only just begun! #LCFC fans enjoying drinks in the sun in the city. Incredible atmosphere pic.twitter.com/2IRH4qNbqU

Outside the stadium the local Sikh community were handing out free food and providing entertainment, a gospel choir was in full flow and thousands of fans who couldn’t get tickets to the game — some tickets were being sold for around $10,000 each by scalpers — partied in the streets. Free pizza, beer and crisps (potato chips) were given out to home fans and even though the heavens opened and a huge rain storm rolled in an hour before kick off, the party went on. Nothing could dampen the spirits of the people of Leicester.

Leicester is a hugely multicultural city and people of different faith and race spoke to me about how this day, this team, this title had brought all of the people of the city together.

32,140 fans packed into the stadium and were given a real treat from start to finish.

Andrea Bocelli brought the house down with his pregame performance on the pitch as the legendary Italian tenor stood side-by-side with Leicester boss Claudio Ranieri who had arranged the impromptu gig. It was spine-tingling.

Cries of “Champions of England, we know what we are!” and “Stand up for the Champions!” began early and Leicester’s fans went through the full repertoire of songs, lauding Ranieri for taking their team to the UEFA Champions League and soon they were singing the famous “Jamie Vardy‘s having a party!” song.

Vardy — as he likes to do — started the party early with a neat finish from Andy King‘s pinpoint cross and then King himself, the man who’s been with Leicester since their days in the third-tier, got in on the act as he added a second.

The Mexican wave then came out as the party atmosphere was cranked up a few notches despite the pouring rain and thunder and lightning overhead.

Leicester were rampant, going close through Riyad Mahrez, Wes Morgan and Vardy again, with the Foxes marking their special day with a special performance against a subpar Everton.

At half time Leicester lad Mark Selby, who won the Snooker World Championship on the same night Leicester won the PL, was paraded around the pitch along with former legends such as Gordon Banks. 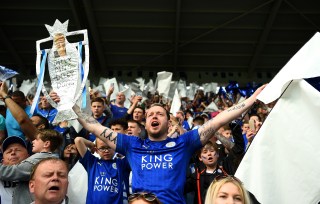 In the second half Vardy added another from the penalty spot and then Everton’s woeful defense gave away another penalty which Vardy this time ballooned over as he missed the chance to grab a hat trick. That would have been too perfect, wouldn’t it? Late on Kevin Mirallas pulled one back as the game ended 3-1. In truth, nobody cared about the action on the pitch.

One more rendition of “Championes, championes, ole, ole, ole!” was belted out in stoppage time as the final whistle saw incredible celebrations in the stands and on the pitch.

When the game was over the moment everybody had really turned up for arrived.

At 7:40 pm local time, Morgan stood tall and proud as he clutched the PL trophy and thrust it into the air with Ranieri and his teammates by his side.

The fans went wild. The world watched on. Leicester City were crowned Premier League champions on a day the Midlands city will never, ever forget.

It was a perfect day to cap a fairytale season and as fans streamed out of the King Power the party was set to continue long into the night. It probably won’t stop for weeks, if not months. The magnitude of what this city in Leicestershire has witnessed over the past nine months is indescribable. We may never see a more unpredictable title win in Premier League history. This may well be the best moment in PL history.

And Leicester will likely never, ever see another party like this.