For the full archive of our review content, just hit the link above. Now it is time to crown our Coach of the Year in the Premier League.

Claudio Ranieri – What can you say about this bloke? He has pulled off the greatest managerial achievement in modern sports. Simple. Years from now we will be shaking our heads when we think about what Leicester and Ranieri achieved this season. Plus, he is a genuinely nice guy who treats everyone with the respect they deserve. In return, he has gained immortality.

Claudio Ranieri – In a year of outstanding managerial jobs, guys like Slaven Bilic, Ronald Koeman and Eddie Howe can feel a bit stung that they ran into a man who just may have done the best managerial job in history.

Claudio Ranieri – Duh. Engineered one of – if not the – most incredible sports stories of our lifetime. I think that qualifies. Mauricio Pochettino in a distant second because he had a really good season. Doesn’t quite stack up though.

Claudio Ranieri – Can you really choose anyone else? The Tinkerman’s decision not to tinker proved the right move as Leicester’s consistent lineup walked all the way to the Premier League title. One of the all-time great characters in Premier League history.

Claudio Ranieri – Not only was he the best coach on the best team, but he was also the most entertaining.

And the winner is… Claudio Ranieri! – A unanimous choice and really, the only choice. He galvanized a solid group of honest professionals and made them believe they could stun everyone and win the PL. And they did it, as Leicester City won the Premier League by 10 points.

He used every ounce of his experience along the way to keep expectation levels low and keep the feet of his players on the ground. Ranieri didn’t change much after arriving last summer but the subtle tweaks he made were masterful. It was as if the 64-year-old Italian was building his whole career for this season. Magnificent achievement for a man who thoroughly deserves all the plaudits coming his way. Congrats, Claudio! 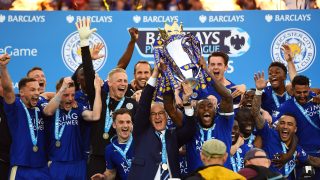