For the full archive of our review content, just hit the link above. Now it is time to crown our Young Player of the Year in the Premier League as the only criteria was that the player had to be under 23 at the start of the season.

Harry Kane – He won the golden boot and proved he wasn’t a flash in the pan. Kane scored 25 goals in the PL this season, became a starter for England and has delivered whenever Spurs needed it. The fact he has starred in a Spurs team which has the youngest average age in the PL and the fifth youngest in Europe makes it even more exciting. So much more to come with him as the spearhead.

Harry Kane – I know Alli is getting all the plaudits but it’s inconceivable to me that his year was more valuable or outstanding than the year Kane had in the same lineup.

Dele Alli – I always enjoy using this award to recognize someone who is relatively new to the scene, as I feel that’s what it was intended for. With all due respect to Kane (who probably technically is the correct winner here), I feel that Dele Alli’s breakout season is most deserving of this award. He was a crucial part of Spurs’ tactical setup all year and is a very important player to their setup in the future.

Dele Alli – He entered the season hoping for ten appearances, and finished the year with ten goals to go with nine assists. The 20-year-old midfielder was a top performer for Tottenham, and will be for years to come.

Harry Kane: Dele Alli gets a ton of credit for what he did this season, and rightfully so. However, Kane not only went out and matched his goalscoring total from a season ago, but surpassed it.

And the winner is…. Harry Kane! – He followed up an incredible debut season in the PL by winning the golden boot as the PL’s top scorer, dispelling any thoughts of him being a one-season wonder. He simply doesn’t have a weakness in his game.

His goals propelled Spurs’ title charge and sealed their spot in the top four, a huge achievement for Mauricio Pochettino with such a young team. Kane is a shoe-in to start for England at the 2016 European Championships this summer and has the hopes of a nation on his shoulders. No pressure, Harry. 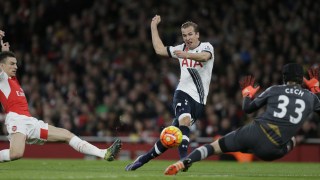